How to learn about Ipomoea alba, moonflower, used to vulcanize rubber

Our educational program will have many components on the important utilitarian native plants of Guatemala. Each eco-system has different plants, but the Mayan people have often been able to raise some species even though their altitude, weather, and soil is not precisely what the plant prefers in its native area of origin elsewhere in the Maya world. And some species are available only in gardens: they are no longer found out in the wild: yellow, pink, and various shades of red-flowered Plumeria are a good example. In the wild you get only white Plumeria flowers, often with a yellow center.

But often a flower actually grows naturally outside its supposedly native area. So for Plumeria we have found this flower in humid Karst geology areas of Alta Verapaz. The theoretical home territory for Plumeria (in Guatemala) is dry cactus areas, especially the Rio Motagua area, but also around Sacapulus. Lots of cacti in both these different and widely separated parts of Guatemala.

So our field trips have resulted in discoveries about the native plants of Guatemala which are not in botanical monographs nor in peer-reviewed journals. 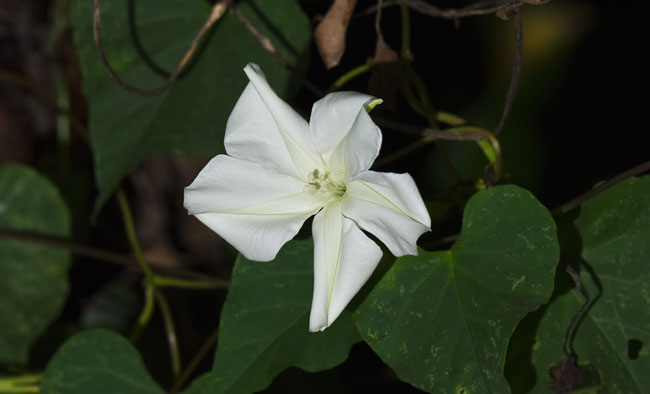 Much to our surprise, Ipomoea alba, Moonflower, is also a medicinal plant. I hope it is included in books on Mayan medicinal plants, but I bet it is missing from many of them.

Years ago I was aware that Ipomea alba was the flower whose vine was used to provide an ingredient which resulted in vulcanizing latex from the native Maya rubber tree: Castilla elastica. But I was not familiar with this flower in-person until mid-2015.

I had been asking the student botanists who work for FLAAR to help me find specimens of Ipomoea alba wherever it was native: out in the remote areas. I was also asking our plant scouts to find this Ipomoea alba in the far away areas where their families life. Plant scouts are local Mayan-speaking people who know all the plants of their area of the country. But months went by and we did not have access to any Moonflower plant. 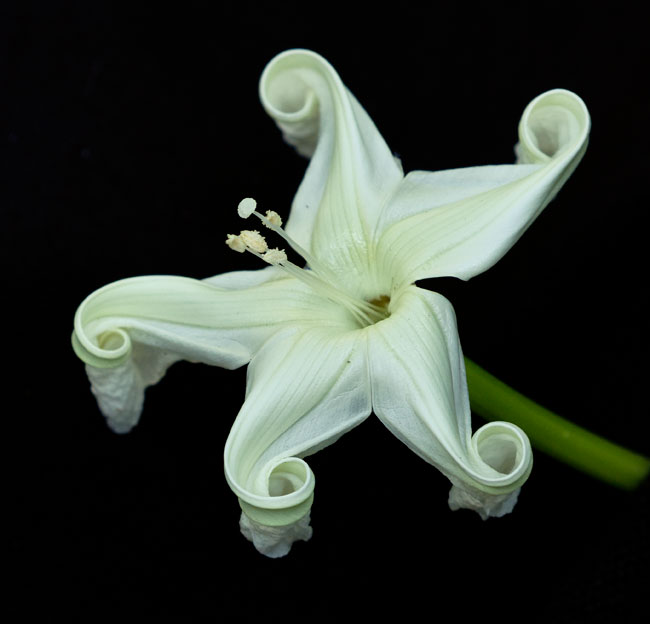 It sure helps to have a nice photo studio next to your ethnobotanical research garden., We are using Westcott fluorescent lighting, Gitzo tripod, Arca-Swiss tripod head (over 38 years old). We prefer Savage Widetone Seamless Background paper as backdrop (Savage Universal company). Photographed with a Nikon, macro lens, after midnight of Dec 28th (so 12:40 pm, which is morning of Dec 29th, 2015). Now you know why this plant is called Moonflower! However normally they bloom at 6:30 to 7 pm.

However blooming time varies depending on rainfall, temperature, etc. Their natural eco-system is Alta Verapaz (and elsewhere), at varying altitudes (common around Senahu, which is high in the mountains above the Rio Polochic at not much above sea level).

It is very unusual for an Ipomoea to have its petals in this awesomely geometric position. And even more unexpected to have a photographer willing to stay up to past midnight to take a photo like this.

One day in the garden surrounding my office I noticed a white flower; it looked like a normal morning glory. But the student botanical assistant quickly identified it as Ipomea alba. What a pleasant surprise, since this turns out to be precisely the most important vine plant for the Classic Maya ballgames.

Ironic, after having written 10 reports on the rubber ballgames of the Maya and Aztec in the 1990’s, after decades of studying the ballgame paraphernalia of the Classic Veracruz of El Tajin (Mexico), and after so many years studying hachas, yokes, and occasionally palmas from the Costa Sur area of Guatemala, it turns out that the primary chemical ingredient for rubber was growing in my own garden. 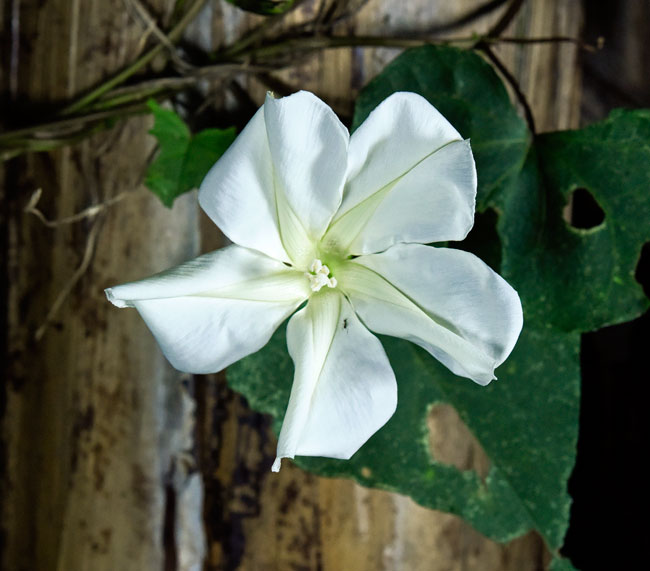 I assume that on a field trip a previous year or so that I had noticed morning glories along the road and had stopped to get a sample to bring back to the garden. Once I noticed that we had the plant, I went out the next morning to check on the flowers. After all, Ipomoea is the genus with dozens of species of Morning Glory flowers. These come in many colors all over the Americas. There are about 28 species listed for Mexico (Diaz 2009:42) and our team has found mention of way more than minimally 32 species for Guatemala. We are now doing research to prepare an itemized tabulation of species in both these countries, plus Belize and Honduras.

And most remarkable of all, it opened in a split second: POP, Bam, totally open.

So I decided to do stop-action photography (this is higher resolution than video). Now, today, we have been doing stop-action photography of between 18 and 20 different flowers. We know pretty much what the opening sequence is. Plus we have learned that on a night that is really really cold, the flower opens more slowly, and one opened during the day, not at night (however this was a day of a full moon, plus the fluorescent lighting used to illuminate the flower to make photography realistic at high resolution).

But in these six months I have learned a lot about the flowering and seed production of Ipomoea alba. Yes, I read every peer-reviewed journal and monograph that I can find. But many of the standard statements about this flower are not always precisely what our flower is doing. We will discuss the behavior of our plant in our Mayan ethnobotany web site as soon as time and funding allow.