Before we develop a Mayan animal comic book character, I endeavor to meet the animal(s) in-person, and learn about them eye-to-eye: even if it is a Crocodylus moreletii

My personal experience with a Guatemalan crocodile

As target practice in rural areas, children and young adults use gigs to kill baby crocodiles. A gig is a double-speared harpoon-like spear.

They also throw rocks at animals to amuse themselves. Plus they use sling-shots to shoot at anything which moves, including endangered species such as macaws.

One day, while on the Arroyo Petextatun (near Sayaxche, Peten, Guatemala) we saw a bunch of kids with a baby crocodile hanging from their gig. Since they had just speared the crocodile, we were able to rescue the croc before it bled to death (or before the parents cut off the reptile’s head with a machete).

Since we did not know any veterinary doctors in this remote area, the medical doctor with me treated the croc with what he had in his emergency kit. But since the crocodile had two holes in its neck (from the gig, a two-part spear), these wounds would fill with water if we let it back in the river (plus the kids would find it again, as would jaguars or local dogs).

So I flew the injured crocodile back to Guatemala City to take it to a veterinary doctor. While on the airplane the understandably disoriented crocodile got out of the basket on the floor under my seat, and wandered around under the other seats. But this was a DC3 or comparable, and in these days (1970’s), in this area there was no pre-boarding check station at the Sayaxche “airport”. In fact there was not even anyone to chase the cows off the dirt runway, the plane had to circle several times before the cows wandered off.

Once back in Guatemala City, I took the crocodile to the vet. I think it was quite an experience for them both (the croc and the vet). Since the crocodile needed a long time to heal (to regrow the body tissue and skin), I decided to keep it in our research facility where we could administer medicine when needed.

Since I do not like to keep animals in cages, we made a pool inside the house and let the crocodile wander around the facilities, inside or outside, as it wished. Once it was cured totally, we donated it to the La Aurora Zoo.

Although the crocodile never actually took a bite out of me, it definitely was not an animal to cuddle with. I was a tad sad that it did not want to at least thank me for saving its life, but after all, its first memory of me was me pulling a forked gig out of its neck!

But to create crocodile characters for our Mayan comic book project, at least I have a preliminary experience with one species, Crocodylus moreletii.

There are three different crocodilian reptiles in the Mayan areas

The Caiman crocodilus is found mainly in the Pacific Ocean side of Mesoamerica. So you get lots of these in the Canal de Chiquimulilla. The local CECON team raises these caimans to release them into the wild. Despite the scientific name crocodilus (sic), this is an alligator relative, not actually a crocodile. Best to call it a caiman. 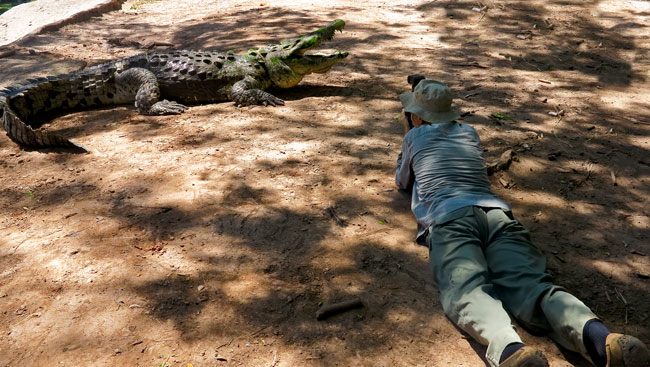 Crocodylus acutus are also very common on Honduras. The mayan culture is extended through the north parts of Honduras.

The very spiny-surfaced Crocodylus acutus is found in salt water estuaries along the Caribbean Sea side of Mexico and Belize. To study these we went to a crocodile farm in Honduras.

The slightly smoother surfaced Crocodylus moreletii is found in the rivers and lagoons of Chiapas and adjacent El Peten. Technical articles give the full area where each species can be found, but if you are visiting Guatemala, now you know where to find each species.

In the Peten area, most hotels which are along a river or lake may tend to have a Crocodylus moreletii living in front of the hotel and relatively accustomed to people visiting the hotel. Who knows, perhaps they hope someday you will want to swim in the river! 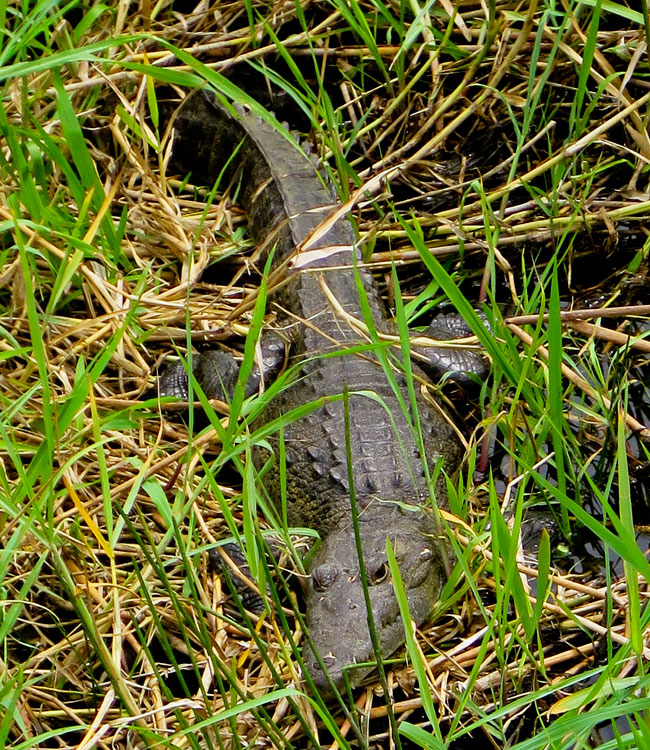 Here is a photo of a Crocodylus moreletii just a few meters from me, in the Rio San Pedro, in front of the boat dock of the Las Guacamayas Biological Station.

This is the crocodile that lived in the aguada near the sculpture museum in the Tikal archaeological park. Unfortunately it or one of the other local crocodiles liked arms and legs of local people.

A crocodile in Lake Yaxha attacked a Dutch tourist and nearly killed this unfortunate swimmer. I lived on the shores of Lake Yaxha for five seasons (over five years). We swam in the lake every afternoon (no showers or even bathrooms in our camp, so the lake was where we could wash off the sweat from the day’s work). On rare occasions I swam at night with my girlfriend (not a good idea in a crocodile infested jungle lake). So far, however, I have never been attacked by a crocodile in Lake Yaxha, but I am more careful at my current age than I was in the 1970’s when I spent the five years mapping the ruins and creating the Lake Yaxha-Lake Sacnab national park.

Each Mayan animal has different names depending on where you are

It is normal for an animal (or plant) to have many different local names: Morelet's crocodile, Belize crocodile/alligator, Cocodrilo de Pantano, Lagarto de El Petén, Lagarto negro, Lagarto Pantanero. Plus you get all the local Mayan words: often a slightly different word for each regional Mayan language.

Some suggested reading on Crocodylus moreletii

As we continue to undertake more research we will expand this list of suggested reading on Morelet’s crocodile and then post the expanded edition on our bibliography web site, www.maya-art-books.org.

http://explorewithindigo.com/pattern-recognition-research-on-morelets-crocodile/
Several good photographs of young crocodiles so you can see their bright coloration at this age.