There are two species of iguanas in Guatemala

The “green” iguana is actually gray as an adult.

Iguanas are eaten throughout Guatemala and sold at many Mayan style markets. However it is probably illegal to buy or sell a wild iguana that a hunter has trapped, shot, or otherwise caught. But iguanas can be raised on farms. It is probably legal to buy, sell, and eat these.

My recent experience with a baby iguana 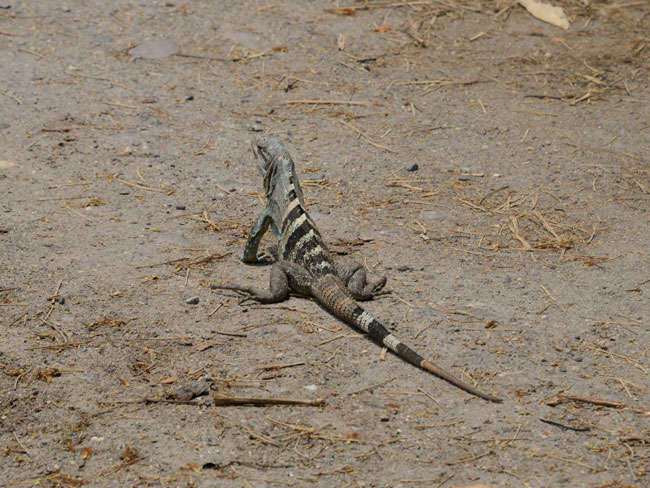 Baby Iguana. As you can see in the picture this is a baby iguana. You can tell this by seeing the size of the tale, body, crest and dewlap.

While watching a polo match in the Costa Sur area of Guatemala, someone pointed out a crippled iguana. We picked it up, since it would be crushed either by the horses, or the people. Since the iguana was only a few centimeters long, and the same green color as the grass, it would not be visible (and thus crushed to death).

So we rescued it, and noticed that most of the body was totally rigid, and one rear limb was also rigid. Evidently he or she had been stepped on at that side, and literally crippled.

I decided to take it to a veterinarian to get medical care. But it was an hour or so before we got to the nearest vet (at AutoSafari Chapin). The entire hour the baby iguana moved only its eyes; the rest of its body was locked in shock.

Dr Gustavo Gonzalez gave the tiny iguana an injection and said that potentially this could help. But since the iguana was still locked in a “concussion” if I left it anywhere it would be stepped on or eaten by a bird or other carnivorous animal. So Sofia kindly volunteered to take it back to her house to allow it to get well again.

Evidently within a day the baby iguana was out of shock and happily running around the garden of Sofia’s apartment. No cages here, the iguana was in a garden. A light bulb was set up to provide heat since at the 1500 meter altitude it may get a tad cool for an iguana used to lowland temperatures.

We thank Dr Gustavo Gonzales for knowing what kind of inoculation to give this iguana to save it from being permanently crippled.

Previous experience with an adult iguana

Iguana iguana green Iguana. Most of the male iguanas have a bigger dewlap and crest, comparatively to the female iguanas.

In the 1980’s I wanted to do photography of an iguana, close-up. The easiest place to get an iguana to pose for photography was any local market. Iguanas are openly sold in most markets (at least in the 1980’s).

The iguana was a full-grown adult. What was remarkable is that it never moved while I photographed it. It never tried to run away or nip me or anything. It just posed as a model.

I wish to see (and record) what causes the iguana to raise his back “spines.” And what causes him to show off his flap hanging down from his throat. (I estimate a shy female iguana has to walk by).

I would also enjoy experiencing seeing babies hatch from the iguana eggs.

And I would enjoy experiencing having an iguana feel content around me, and not just posing for me to do photography. I guess it takes time for an iguana to understand what a human expects. But I am curious how an iguana leads its own life.

Where to see iguanas in Guatemala

Lots of Iguanas in the CECON research facility and small zoo in Monterrico. They usually have baby iguanas and adult iguanas (I estimate most if not all are the green species).

You can find many mature adult male iguanas at AutoSafari Chapin (one hour before Monterrico). The ones I saw are all free-wandering (in other words, not in cages).

If you want to see iguanas outside in their native habitat, there are hundreds of locations, but where I remember seeing a lot are along the river which takes you to the Mayan ruins of Cancuen. You reach this river by driving through Raxruha, Alta Verapaz, Guatemala.

The present stage of our storyboards is featuring bird and four-legged animals. But we also have a long range interest in amphibians and reptiles, especially the two species of crocodile and one species of caiman in the Mayan areas of Guatemala.