The chachalaca, Ortalis vetula of Guatemala, is a cute, friendly, raucous wild bird of the Mayan rain forests, and is a potential comic book cartoon character for MayanToons

Our experience with Chachalacas, Ortalis vetula, a remarkable bird of Guatemala

The best known chachalaca of the Mayan areas is Ortalis vetula. Birds of this genus can be found from the southernmost end of Texas down through Central America into South America. The bird is very noisy (singing) and since it is the size of a chicken, it is easy to see even in the tree tops. Plus, this bird is not afraid of being near people, so they come right up to the trees directly over your house (or over your hotel room).

Although the bird prefers local fruits, insects, etc, you can easily make friends by offering it junk food! Whereas most other birds are shy of people, the chachalaca is very common around houses and hotels (when the hotel is a series of small bungalows with plenty of local trees around the bungalows). 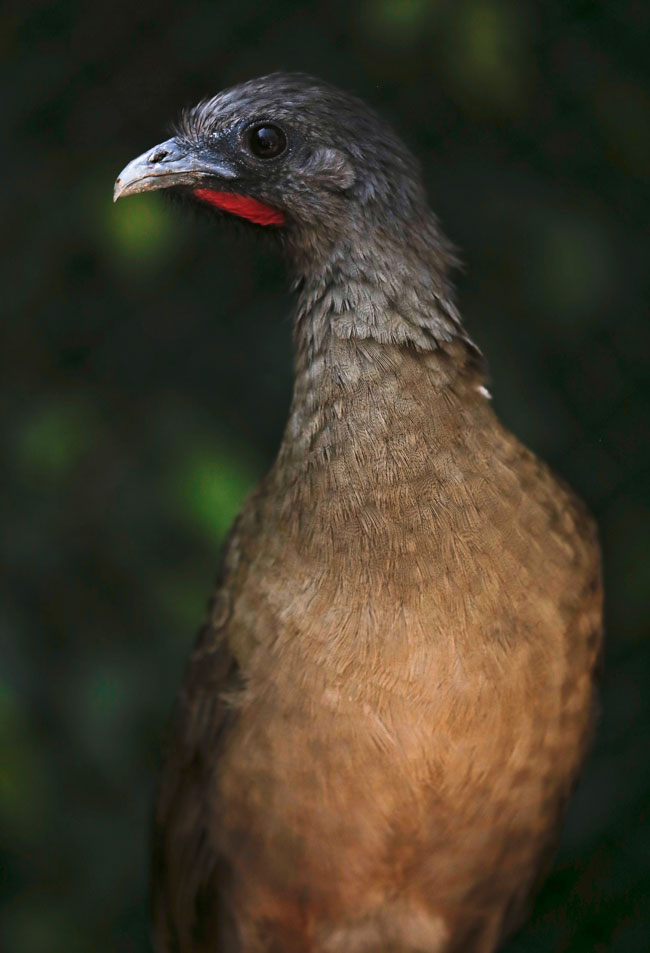 Chachalacas are available to get close to inside the main bird area of La Aurora Zoo, Guatemala City. This zoo is definitely worth visiting.

You can expect to experience chachalacas here, in fact they act like alarm clocks, waking you up with their raucous crackling “singing” every morning.

Another alarm clock at the La Estación Biológica Las Guacamayas is the howler monkey!

Julian Mariona, the owner of the Hotel Ecologico Posada Caribe, has been both outfitter and tour guide of groups organized by FLAAR for over three decades. You can experience chachalacas, howler monkeys and lots of remarkable jungle plants (plus visit the archaeological sites around Lake Petexbatun such as Dos Pilas and others). Just be prepared to hike a bit through mud, since the “rain forest” floor is usually soft and mushy. But I and my tour groups have survived quite well every time.

In Guatemala City there are choruses of birds singing around our office several times a day, but unfortunately no chachalacas. But I was pleasantly surprised to find several chachalacas at the Parque Zoológico La Aurora. We went there earlier this week to do close-up photography of birds, reptiles, and mammals related to the Mayan people of Guatemala.

Inside a walk-through aviary, I was in the process of setting up my camera when a chachalaca flew up from a fence rail and landed on my head.

We where trying to photograph the chachalaca, but suddenly she was the one curious about us. We often study the Chachalaca, Ortalis vetula, in the Aurora National Zoo Park.

I was so surprised I was shocked. I had not even noticed the bird, since I was photographing another bird species 5 meters up in a tree. So I was not looking down at the fence rail area.

Since there was no “branch” to hold on to, the chachalaca had to flutter round to be sure he felt comfortable on top of my head. Fortunately I had a hat on (or his talons would have dug into my head, as they did of Erick who was nearby. A second chachalaca flew up to land on his head.

Once the other chachalacas noticed that one was happy on top of my head, another one decided he or she wanted to sit there as well. But there is not space on top of my head to hold two chicken-sized birds. So there was a lot of bird fluttering on top of my head as the second bird tried to find space to land.

One of the birds had the vacate my head (since I could not see which bird was successful, I do not know who got bumped off). Within a few minutes the bird that was bounced off would fly up again to try to be the benefactor of the throne position on top of my head.

Since there was another team of chachalacas a few meters away, who were taking turns perching on the head of either Pedro or Erick, the photo team was not always focused on my head, so we only have a few still shots and a few seconds of video.

Frankly I have never experienced anything like this. Fortunately I did not freak out (at least not externally). So I never tried to bat the bird off my head. I simply stayed calm, cool, and collected (at least externally). So the birds did their acrobatics on my head every few minutes.

My heart was definitely beating at an abnormal rate, first because in the beginning I was terrified their claws would poke out my eye. I was then nervous that once the bird was settled on my head as its perch, that it would see if it could nip out my eyeball!

But experience told me, “don’t make any sudden moves or the bird also will get nervous…”

So now I have a close-encounter with two chachalacas, plus directly in front of me I watched other chachalacas do the same to the heads of Pedro and Erick. So this visit to the Parque Zoológico La Aurora was definitely memorable (keeping in mind I have been studying animals here since I knew photographer and animal enthusiast Dickie Mata many decades ago).