Two species of peccary occupy the Mayan areas of Mexico, Guatemala, and Belize 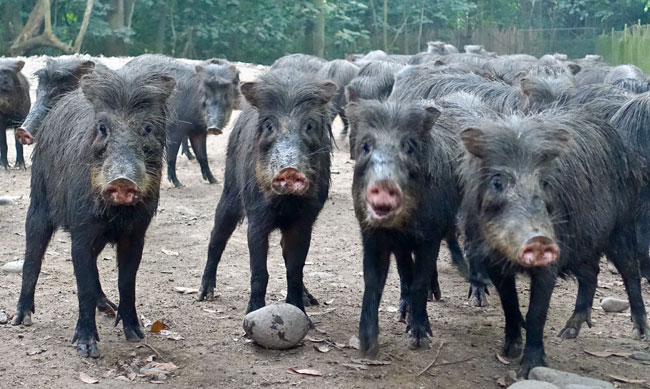 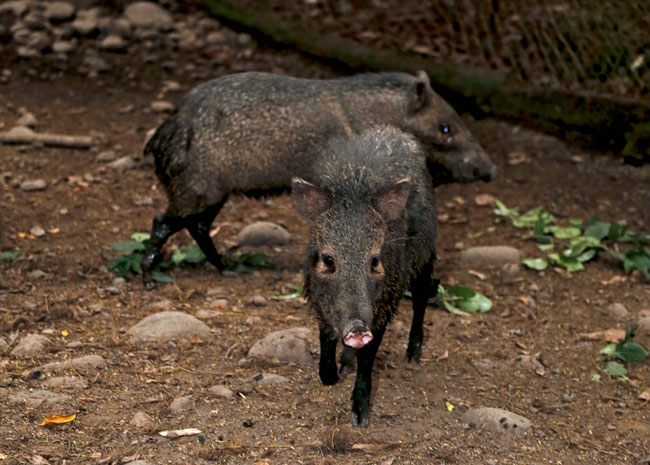 Peccary, like jaguars, are symbolic of the Mayan culture. Peccary (and jaguars, deer, and spider monkeys) are frequently shown in vase paintings on ceramics. So it is logical that we will have peccary characters in our Mayan comics and eventual MayanToons animated films. This web page is to introduce the actual peccary: our cartoon characters will be introduced later.

Peccary have a reputation of mass attacks on humans who get in their way. The zoo staff of every zoo where I do research warns me NEVER to set foot inside a peccary pen.

But, at least for the collared peccary, I know for decades that they easily adapt to living with people.

Here is a 20-year old photograph of Andrea David (now Andrea Rickert) with a peccary, probably at the Hotel Maya International, Santa Elena, Peten, Guatemala. The photo was damaged with all the humidity over the years and so has places where the image is missing, but you can see Andrea making a peccary very happy. This is the standard position a peccary puts itself to be rubbed (just like a happy pet dog).

While doing plant research in the area of Punta de Manabique and Amatique Bay, Izabal, Guatemala, a local person said that he had found a tiny baby peccary out in the wild. I suspect he had shot the mother to eat it.

He said that the baby peccary quickly adapted to living with their family. He said it stuck to him like a shadow, even causing him to trip occasionally because the baby peccary would walk between his feet (since the peccary did not want to get too far away).

In the Palenque, Chiapas, Mexico hotel area where Merle Greene Robertson had a house (two decades ago), there was a pet peccary named Petunia. She was totally free to wander around as she pleased.

She would “knock” at your door to ask to come in, and since Petunia was a clever peccary, she had long ago learned that most gringos would rub her if she lay down and made it clear she wanted to be rubbed. Just like many dogs and some cats.

Once she had her relaxation, Petunia would get up, indicate she wanted you to open the door and let her out, and she would go visit someone else down the street.

So already long ago I realized that peccary loved to interact with people and desired to be petted and especially to be rubbed.

Learning to interact with Pancho the Peccary

Pancho was born with at least one deformed rear (left) hoof. The zookeepers felt this injury would cause it either not to be accepted by the herd, or eventually injured (or maimed if a Macho Camacho type of bully came at him).

So Pancho was rescued and given a place to stay in the equipment repair and food preparation area. Here he has plenty of people walking around, so from an early age he realized that not all people would hurt it or tease it. 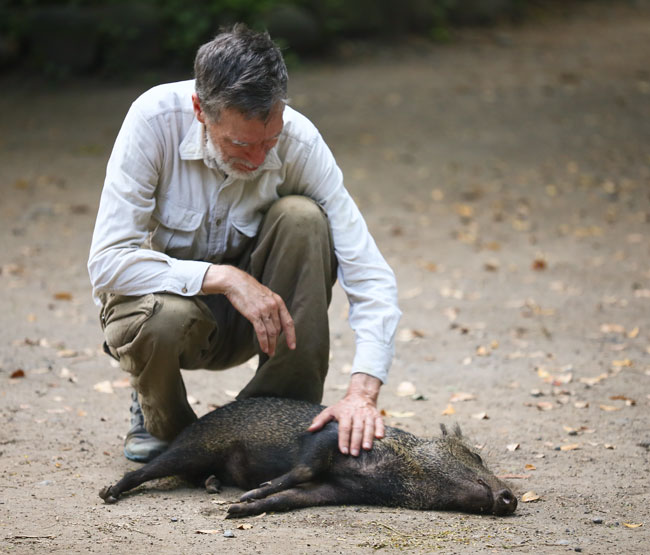 Peccary tajacu. You can find it on the Autosafari Chapin too. You can interact with them, they're very used to people.

Peccaries have a powerful jaw and lots of fangs including teeth for cutting, chopping, and piercing. So I wanted to establish a non-confrontational relationship with him. So rather than playing the Alpha Male, I decided to act as a friend. It took only a few minutes for Pancho to realize this. It clearly enjoyed being rubbed.

We had to go elsewhere in the extensive park, so I said goodbye to Pancho. But about 2 hours later Pancho found where I was, and immediately came over when I called.

Now I was curious how quickly I could get Pancho to melt onto the ground. It did take several minutes, since every time anyone nearby stepped on a dry leaf, that made a cracking sound that caused Pancho to want to rise up to judge what danger was coming

This was one very content peccary. I have a lot more to learn about peccary, but today was a good start.

Many people complain that peccary stink (as you would expect of a pig-like animal!). Indeed the Maya artists of the 4th through 8th centuries show scrolls issuing from the peccary snout (like bad breath?). But Pancho the Peccary had no noticeable odor nor did the area where he slept. Maybe the other species is responsible for the smelly reputation of peccary?

But peccaries do have a musk gland.

Most people in remote areas of Mexico, Guatemala, and Belize hunt and eat both species. In the 1970’s I lived for many years deep in the Peten forests and since there are no grocery stores for food, in order to survive we at peccary. When you are hungry you don’t worry about the taste, but I would not list peccary as very yummy.

Is a peccary a pig?

What are the differences between a peccary and a pig? We will have an entire comic book to answer this question. We are presently doing the drawings for this comic book.