Tarantulas of Guatemala are common in Peten (Tikal, Yaxha, etc), Alta Verapaz, and elsewhere; they are not dangerous (in most cases)

With so many cartoon characters already existing, I wish to develop innovative cartoon characters based on a tad more realism. Yes, our characters will be part human and part animal (in other words, anthropomorphic animals). But I will do my best to learn the different personalities of different animals.

So far I have experience interacting with tarantulas in El Peten, Izabal and Alta Verapaz areas of Guatemala. Local people are scared of tarantulas so they kill them. I put my hand on the ground, and patiently wait until the tarantula comes to test my fingers. And if he trusts my fingers, the tarantula jumps into the palm of my hand, and soon he scuttles up my arm to rest on my shoulder.

I understand that many people do not wish to even look at spiders. Frankly, their body structure and web structure is worth learning about. I have seen sizes and shapes of webs every year that I have never experienced before.

Although we will not have any spider cartoon characters at the start, we have this page on tarantulas to document how we learn which animals are dangerous. I would never put my hand anywhere near a pit viper; but I have no hesitation to let tarantulas hop into my hand. 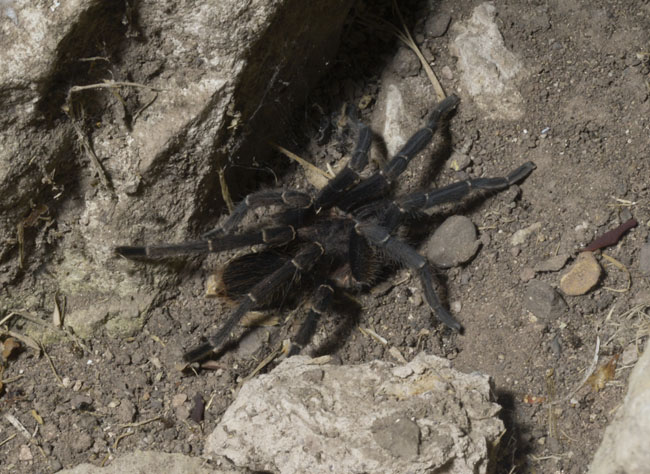 Tarantula We found this little fellow in Copan. This creatures are part of the Mayan historical iconography.

Tarantulas Should be preserved Not chopped up with a machete

This is the title of my photo essay on years of experience with tarantulas. There was a tarantula in my dorm room while a 19 year old Harvard student volunteering as a student assistant for the Tikal archaeological project in the rain forests of Guatemala in 1965.

During the following years when I visited Tikal again, Lake Petex Batun, or other areas of the Maya Lowlands, there were always plenty of tarantulas. Although I did not freak out, I did not exactly get cozy with them in these early years. It took me several decades to understand that tarantulas will not attack you (if you do not get him or her nervous).

Perhaps it was on a field trip with university biology student Daniela de Costa that I learned to be more at ease with these giant tarantulas. But my first direct personal interaction with a tarantula was in the Rio Dulce area of Izabal. Someone found a large adult tarantula crawling around near some huts of local people.

An assistant talked me into accepting the tarantula on my hand. It seemed content in my hand, and then crawled up my arm to my shoulder. When it decided to explore my back by getting under my shirt, I asked a brave assistant to please remove it. He put it back on the ground.

The local Maya5n people freaked out at how a gringo could be so totally stupid and allow a “dangerous arana de caballo” (a HORSE-sized spider) to run around my hand, arm, and down my back.

We were exploring the well known cave area of Candelaria Campo Santo and I was hoping to find some centipedes (not a creature to have hopping into your hand!). The local Q’eqchi’ Mayan people kindly went to look under stacks of rotting wood behind their houses.

Instead of centipedes, they found lots of large healthy tarantulas. The workers raised their machetes to chop the poor tarantulas into pieces.

Fortunately I was nearby and came running over, and asked them not to slaughter the spiders. But the men said the spiders were vicious, dangerous, nasty, and deserved to be killed.

Since merely saying that the spiders would not attack them (unless they pestered the spiders), I got down on the ground, and stretched out my hand.

If the tarantula raises itself up on its back legs, and raises its front legs out wide, this is the spider’s way of saying “I will attack if you come closer.”

But, if the spider does not raise up on his hind legs, and instead looks a tad bored, normally the spider will take its front legs, at friendly ground level, and tap your finger tips to test what kind of bizarre surface structure is your hand. 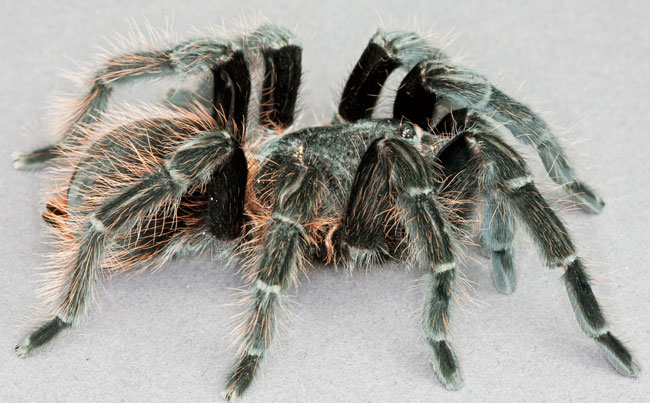 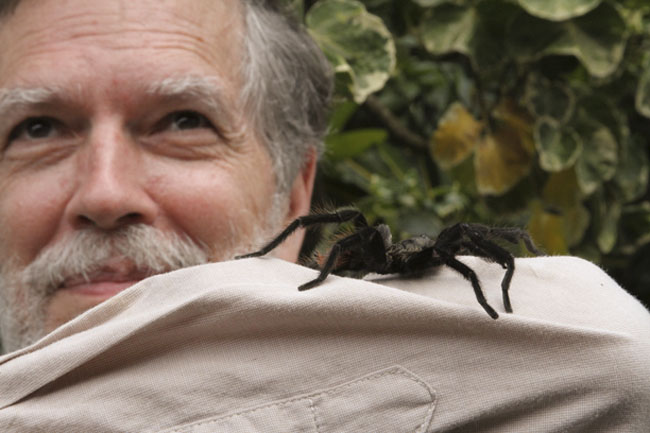 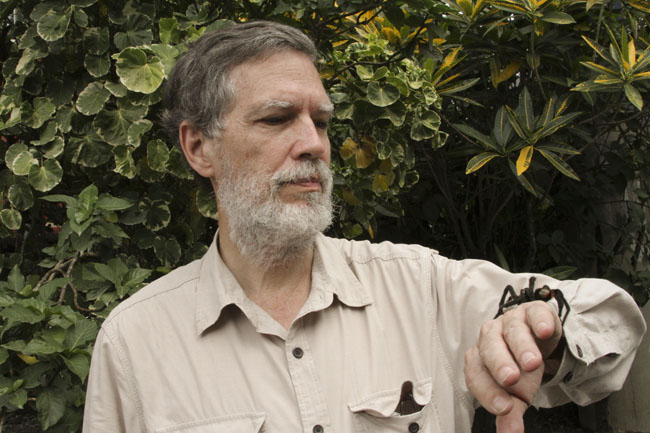 Look! Be very careful with the way you treat them, you need respect them and touch them softly, they need to feel safe in your hands.

Once he feels that your hand is not aggressive, the tarantula will hop into your open hand.

Once the tarantula feels content in your hand, it will run up your arm.

If you wish to remove it, simply gently put your fingers around its hairy body, and lift if off. Yes, just put your hand around it gently.

Lots of local people will explain what happens if the spider does bite you; but I bet most of the loss of fingers and limbs is because the wound gets infected since there are no local doctors, no local pharmacy.

But I learn from tarantulas: if you are not evil, wicked, nasty to other creatures, in most cases they can become friends and will not bite, sting, or have any desire to harm you either.

Having a pet tarantula is common, but we recommend providing a tarantula their own natural garden area so they can catch the kinds of creatures that their ancestors have for millions of years. Most tarantulas of Guatemala prefer to live underground (which implies outside in the real world (meaning not inside a cage)).

This new web site of educational Neotropical animals with a basis in Mayan culture of Guatemala (and Mexico, Belize, Honduras) was launched in September 2015 based on over 50 years of experience by Nicholas Hellmuth in Mesoamerica.

Nicholas was at the Maya ruins of Palenque at age 16, and his high school thesis on the Maya ruins won first prize in his class. This kind of innovative “escape” from a normal summer of traveling to Europe, or spending the summer on a beach or in a swimming pool, or a summer of golf or tennis of other high school students, was a factor in being admitted to Harvard. Nicholas was not 1st in his class whatsoever; there were two students clearly smarter than he was. The difference (that got him first into Harvard, and later into Yale) was that Hellmuth was not afraid to jump into things in which he had no experience. Once he jumped in, he worked and worked, learning about the new field of endeavor.

The next summer Nicholas happened to be at the same hotel in Tenosique, Chiapas, Mexico, as INAH archaeologists who were about to explore the recently discovered ruins and murals of Bonampak. They invited Nicholas to join them, so at age 17 he already had a remote jungle experience at Mayan ruins.

Every summer Nicholas ventured further into the Mayan world: going to Copan Ruinas on top of a cargo truck load of sacks of beans (since in the 1960’s there was no bus service to Copan from the Zacapa area of Guatemala).

In subsequent summers Nicholas was an archaeological intern at a Harvard project in coastal Peru, then the next summer a Yale university project deep into the Andes Mountains of Peru. In all this archaeological work, he specialized in photography. This is what eventually led, 20 years later, to founding the FLAAR Reports on evaluations of digital imaging technology, both cameras and especially wide-format inkjet printers.

For the last decade Dr Hellmuth has focused on the plants and animals of the Maya world; www.maya-ethnobotany.org and www.maya-ethnozoology.org show our studies of the recent and present years.