MayanToons compared with Maya the Bee and Maya animation software

What is the difference between a Maya bee and Maya the bee?

Maya the Bee (Die Biene Maja) was a common television program while I lived for close to 20 years in Switzerland, Austria, then Germany. The original book dates back to 1912. There have been comic books, TV series from 1975-1980, and recently Maya the Bee Movie (2014-2015). It is ironic that Maya the Bee, which is based on the European girl’s name Maya, is not related to Maya civilization of Mexico, Belize, Guatemala, Honduras, or El Salvador.

Actually there are dozens of species of Maya bees in the Mayan world. When you visit Tikal you can see the black stingless Maya bees inside many of the palaces of the Central Acropolis. At first they may look like a fly, but they are a bee. Do not swat them (if the hive gets upset, then the entire hive gets into defensive action). An individual bee testing the surface of your hand or arm or face is totally harmless (unless it gets stuck in your eye when you blink). They just want to see if they can find any sugar or salty perspiration on your skin. 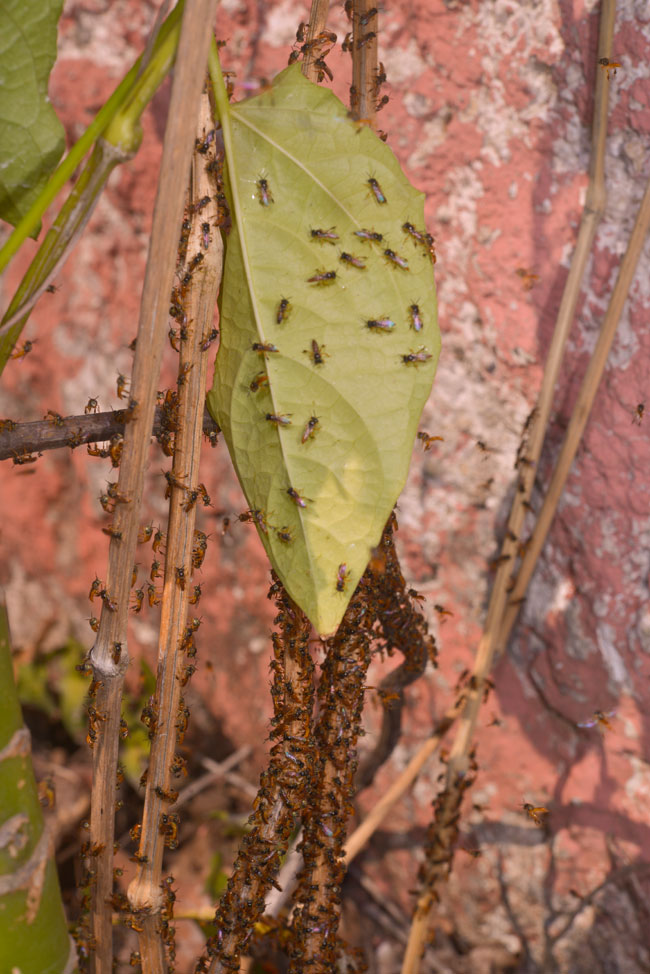 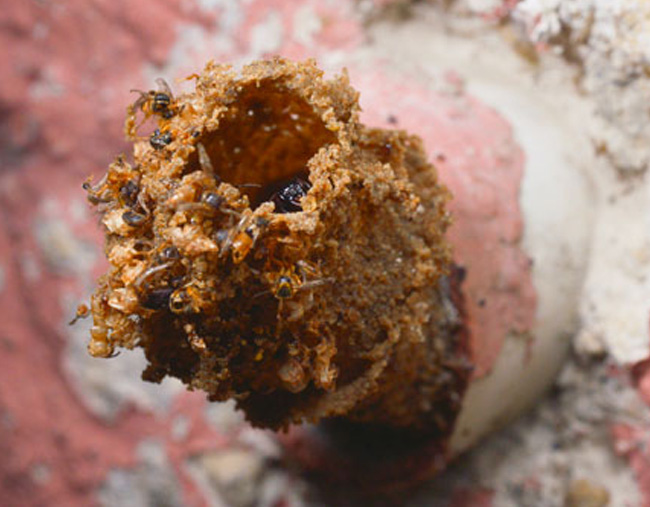 Meliponia The picture on the top shows the Meliponia and the one below shows the black bees riding the hive.

We raise one different species of Maya bee at the FLAAR Mesoamerica office headquarters. These are meliponia; one week they were attacked by the common black stingless bees. Hundreds of the cute colorful meliponia were slaughtered by the attacking black stingless bees (which were larger than the tiny meliponia).

But after the black invaders had stolen as much out of the hive as possible, they abandoned it. A week later the meliponia re-started their colony and today it is still thriving. 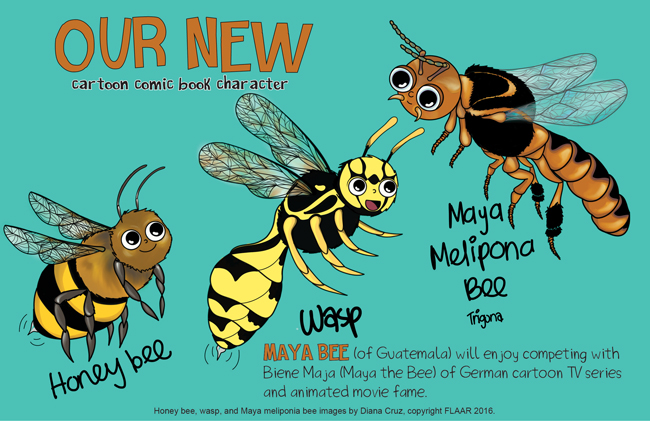 Here is the first appearance of our comic book character Meliponia the Maya bee (Melipona in English). Meliponia is the genus with dozens of species in Mexico, Guatemala, Belize, Honduras, and southward.

Here Meliponia the Maya bee begins her discussion of the differences between a stingless Maya bee and Maya the Bee of Germany (and honey bees of USA, etc).

We will also show the differences between these and invasive African bees. It is also helpful to understand how to distinguish bees and wasps when you see them on flowers.

Our MayanToons books are educational but with humor and satire.

Maya is a common girl’s name, especially in parts of Europe

Maya is a common girl’s name, especially in Eastern Europe, but also used elsewhere. The German daughter of a former manager of FLAAR is named Maya, since her mother Andrea spent several years assisting FLAAR both in Mexico and Guatemala and also organizing conferences on Maya archaeology and iconography at Brevard Community College in Florida.

Normally Maya as a girl’s name is not associated with the Maya civilization nor Maya nor Mayan languages. But since it is a nice name, and Andrea had spent lots of time in Mesoamerica, including her law practice internship in Guatemala City, Maya was a doubly appropriate name.

I have visited and lectured at universities in Eastern Europe, so am familiar with Maya being a name there, related to Maria or Mary. The same meaning is in Germany and a few other western European countries.

You could easily do a college thesis on the origin and meaning of Maya (or Maia) as a girl’s name. The meaning and context would vary depending on what part of the world you study this name: Greece, Arabian areas, India and Pakistan, or in Hindu tradition. Wikipedia had a good list of meanings for these parts of the world. So, for example, Maya, Māyā in Sanskrit, means illusion or magic, but also the meaning depends on the context.

What is the difference between Maya and Mayan?

Officially, the word Maya is both a noun and an adjective. Officially, to university professors, the word Mayan is not a cover-all adjective: Mayan is the branch of language families spoken in southern Mexico, Belize, Guatemala, and adjacent Honduras.

So “do you speak a Mayan language” is what you could expect to be correct.

Unfortunately there are significant exceptions. One of the major Mayan languages, spoken throughout Yucatan, Campeche, Quintana Roo, is “Yucatec Maya.” Plus the language spoken in the Chiapas border area with Guatemala is “Lacandon Maya” (since 500 years ago their ancestors filtered into this previously Chol or Cholti Mayan area as the Spaniards slaughtered the original Chol and Cholti and forcibly moved the survivors to Highland areas.

Maya is a popular 3D animation and modeling software

Maya is a 3D animation and modeling software developed by Alias Systems and then bought by Autodesk in 2005. The official name of the software is Autodesk Maya, but most people simply call it Maya.

It has been suggested that the term Maya for the software comes from Sanskrit, a language of India (http://forums.cgsociety.org/archive/index.php?t-193079.html).

There is no indication that the word Maya for the software is associated with the Classic Maya civilization or Maya archaeology.

We at FLAAR provide tutorials on Maya civilization plus we provide book reviews on Maya tutorials on the nice Autodesk software. The capable university students who work at FLAAR do all use Maya software.

So we have many free Maya downloads, on Maya ethnobotany, Maya ethnozoology, and Maya archaeology, but not yet on Autodesk Maya software. However if you are doing 3D animation, we definitely recommend Autodesk Maya modeling and rendering software.

How old are the Mayan ruins in Mexico?

There are human settlements thousands of years before the Olmecs but the early settlements had no hieroglyphic writing nor monumental sculpture.

The Maya developed in many parts of southern Mexico and El Peten, Guatemala. It takes an entire dissertation or monograph to cover these early ruins, but already several hundred years BC there were pyramid-like structures, carved stone sculptures, and other aspects of Mayan civilization already well developed.

Then the Teotihuacan civilization expanded from Central Mexico southward, circa AD 300 (check with recent monographs to get actual dates). For one or two generations Tikal, Uaxactun, Yaxha, Holmul and other Maya sites of Peten were under dominating Teotihuacan influence.

Gradually the Teotihuacan empire withered and during these same years local Maya groups re-asserted their own Mayan art. But then in during Tepeu 2 times, there was a resurgence in Classic Maya kings clearly showing Teotihuacan deities, showing their solders in pseudo-Teotihuacan military uniforms, etc. But by then Teotihuacan itself had been mostly abandoned.

For many decades scholars preferred to focus on the local Mayan achievements in Guatemala and not to admit to the strong Teotihuacan influence. The FLAAR Report on The Escuintla Hoards was one of the few publications which pointed out the substantial impact of Teotihuacan expansion into Guatemala.

Are the Mayans Mexican?

A million or so Yucatec Maya people are Mexican citizens, as are the several hundred Lacandon Maya of lowland Chiapas. Plus there are other Mayan language groups in the highland mountains of Chiapas.

But there are also lots of Mayan people in the Chorti Mayan border area of Honduras (border with Chorti Mayan area of adjacent Guatemala). There are some Mayan related archaeological sites in El Salvador but only in a limited area bordering on Guatemala.

Are there Mayans still alive today?

When we go on field trips into remote areas, we find villages where no Spanish is spoken: the villagers speak only Q’eqchi’ (K’ekchi’) Mayan language. We have three Q’eqchi’ Mayan speaking employees who go with us to visit the villages.

Some of the dwellings in these villages have the type of beds used by the Maya a thousand years ago. Plus the way they build their thatched dwellings is also a thousand year old style. Of course most new houses are built with concrete block and tin roofs, but we have found some remote areas that still have original Maya style dwellings.

Why do we call our project MayanToons and not MayaToons?

To call anything related to animation Maya would be to suggest it is associated with Maya software. Yes, we use Maya software, but we have no relationship with Autodesk at present, so we felt it would not be appropriate to focus on Maya.

The second reason we call our project MayanToons is because the Mayan languages are the key to understanding Mayan culture. Plus I have been attempting to learn the Mayan Q’eqchi’ language for about 2 years.

Our Mayan cartoons are not focused on the Mayan Calendar