While visiting my architect brother, George Hellmuth, when his grandchildren expressed interest in the birds, reptiles, spiders, amblypygids and arachnids that we at FLAAR study, I offered to give a presentation to their school class. So two teachers at Nottingham Elementary School accepted Dr Nicholas Hellmuth to lecture to their students (3rd grade, and 5th grade students).

Frankly I was impressed by the totally educational nature of this school. I was educated at Barat Hall, a private school with excellent instructors (Sacred Heart nuns and lay teachers, in St Louis). My grandfather was the architect who designed much of the school. My aunt was the second in command at the school.

These two schools got my brother into Yale and got me into Harvard (after which I went to Yale for three post-graduate fellowships). So I will give credit to these two schools I attended from age 8 to 16. But frankly, the Nottingham Elementary School was so much more wide open, so much more expressive (student art in every corridor, and quotes on every wall of how to learn, how to move forward in life). Wow, I was definitely impressed.

Each school class was multi-national and multi-cultural. Since we at FLAAR assist organizations and companies (and especially trade show organizers) in Dubai, Istanbul, Shanghai, Beijing, Singapore, Johannesburg, plus do research on flora and fauna in Guatemala, we have a multi-cultural perspective.

We pointed out that the Mexican people had learned to vulcanize rubber 3,500 years before “American” Charles Goodyear claimed to invent this in 1832. So the Mexican people, which Grumpy Trumpy wants to “keep out” had figured out how to vulcanize rubber THREE THOUSAND YEARS before the US of A scientist! The Olmecs, then the Maya and Aztec, had rubber sandals and rubber balls for their ball games long before Charles Goodyear could figure any of this out.

Plus the people of Honduras (and the Olmecs of Mexico) were using cacao (today misspelled as cocoa, the ingredient for chocolate), thousands of years before Hershey got his act together in the US of A. 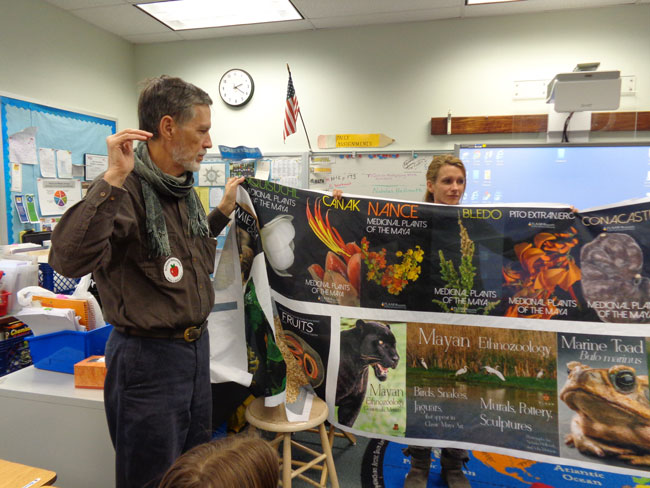 Here you see Julie Montecello, co-owner of Tell Chronicles. She is mother of two students at Nottingham Elementary School (she is daughter of Dr Nicholas’s brother, architect George Hellmuth).

I doubt Donald Grumpy Trumpy is aware of this (though hopefully his advisers advise him). Tough for him to admit that Mexicans are more advanced than gringos in many aspects.

I forgot to mention in the presentation that the word tomato is to some degree evolved from an Aztec (Nahuatl) word, and so on. We (in the USA) have inherited a lot from Mexico, Guatemala, Honduras, etc). 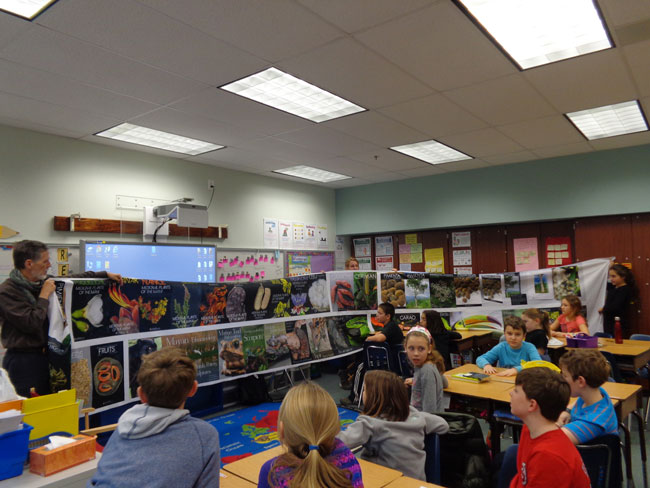 Dr Nicholas has brought a wide-format inkjet printout, in addition to Video and PowerPoint. By printing the images on cloth, the images can be passed around to the students without worrying that the prints will be dinged, dented, or otherwise marred. Printed fabric can he handled by student without damaging the print.

Anyway, it helps to provide a well rounded science program based on first-hand research out in the forests, mountains, mangrove swamps, and deserts of Guatemala.