Scorpions are everywhere in Guatemala, Mexico, and Belize but do not sting unless provoked or scared

Our goal is to describe, and provide information on all the fascinating creatures of the seasonal rain forests, deserts, swamps, mountains, and other diverse eco-systems of Guatemala. Most of these creatures are also in adjacent Mexico, Belize, Honduras, and El Salvador. 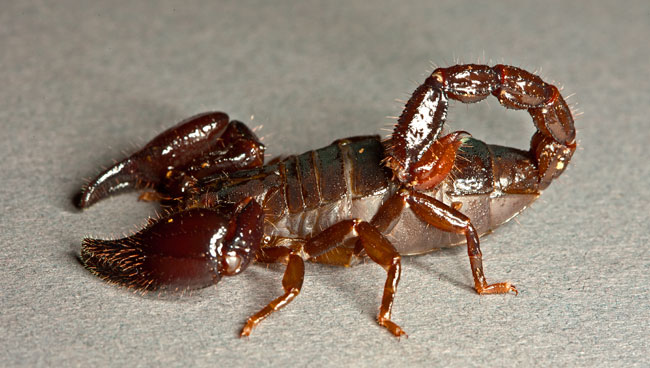 Our method of research is, when possible, personal interaction with the creatures. I have had multiple tarantulas crawling up one arm. I have had tailless whip scorpions on my hand (they live freely in our home-office, they wander around at night; none are in cages whatsoever).

We have bee and wasp nests around the office. And twice I have woken up to find a scorpion wandering across my body (fortunately not in my home). 12 months living in the Tikal National Park (at age 19), and five years of seasons living at nearby Lake Yaxha (age 30-ish) also gave me lots of experience with scorpions.

Plus scorpions wander around our office, though I admit they are not as welcome as are spiders and tailless whip scorpions. The true scorpions live mainly in our ethnobotanical garden but since we keep the doors open to let in the breeze, the scorpions (and lizards and snakes) often wander into the office. The snakes are a rare miniature snake, the size of a worm. These we do not kill, since they would unlikely attack a person.

All this is in the middle of Guatemala City, at an elevation of 1500 meters above sea level.

While living at Tikal during 1965, it was common for the workers to entertain the naïve gringo archaeology students with scorpions. They would come up to us with a scorpion on their hand or arm to see how scared we were. It took us a while to learn that they had pinched off the stinger, so the scorpion could not sting them. I can still remember the mother scorpion with all the baby scorpions on the mother’s back.

We do not recommend pinching off the stinger of a scorpion since then they can’t defend themselves, nor can they get their prey to eat.

My other memories of scorpions at Tikal are in the outhouse. There were no toilets at Tikal in 1965, only two outhouses. When you needed to sit on the stool, first thing you had to do was lift up the seat to sweep away the scorpions. Yes, this was an outhouse with toilet seats on top of the hole! When I grew up in the Ozark Mountains of Missouri, we just had the hole cut in the board, so you sat on the board! No toilet seat in USA in those days in rural Missouri.

So, lots of interactions with scorpions while living in Tikal, at age 19, for twelve months. I was taking a year off from Harvard. In the 1960’s it was the tradition to take one year off from college to have real-world experiences somewhere unusual. So I decided to spend a year in the rain forests of Tikal.

Today, over 50 years later, I am still in Guatemala, and learning new things about flora and fauna every month.

At Yaxha the main presence of scorpions was finding them in your shoe or boots. So when you put your shoes or boots on, you were stung sharply on your toe by the scared scorpion. This happened to archaeologist Miguel Orrego.

But these scorpions are just defending themselves from being squashed by your toes. Scorpions do not (normally) attack people.

One of my projects in those years was to photograph all the ballgame sculptures: stelae, altars, hieroglyphic steps which showed ball players. So we were granted permission to visit Calakmul. The project was in seasonal recess that week, so they gave us the keys to their camp buildings so we could sleep in these structures.

I was put in the director’s house. When I entered there were scorpions literally everywhere. I used a broom to sweep a path so I could get to where I could sleep.

I decided to sleep on top of a table, since the floor had too many scorpions to put my mattress there.

The sink was an area where the scorpions were clearly very content: since the sink had some humidity. I do not mean one, or two, or three scorpions: I mean there were crowds, gangs, groups of scorpions happily living in this structure.

But never did a Calakmul scorpion sting me.

Scorpion in my bed in a Mexican hotel

While in a normal hotel in the Isthmus of Tehuantepec area of Mexico, I woke up to find a scorpion wandering across my stomach. I was able to flick it off so quickly that he did not have time to sting me.

When I woke up the next morning it was resting in my shoes alongside by bed.

But the point is, that scorpions can wander around on you and will not attack you unless you irritate them.

By normal hotel I mean this was not a dirt cheap hotel in some tiny village. This was a hotel that you find in any town alongside a major highway.

Scorpion sleeping on my foot in Belize

FLAAR specializes in high quality photography of archaeology: whether temples, pyramids, or stelae. So we did a project to photograph the stelae of Nim Li Punit in Belize. There were no hotels nearby, so we rented a house to sleep.

The house had not been lived in for several months so had become a haven (and heaven) for hundreds of scorpions.

Me and my East German girlfriend had a camping mattress to sleep on the floor (there were no beds in this house; it was relatively empty of furniture).

I raised my foot to show it to my girlfriend. She screamed.

She screamed, “Protect me, put a wall around the bed to protect me.”

I answered, “A wall will not keep the scorpions away, they will easily climb up the outside wall and climb down the inside and jump on you.”

I added, “Plus, most of the scorpions are on the ceiling. They occasionally lose their grip and will fall on us in the night.”

She screamed again, since now she saw all the scorpions wandering around the ceiling directly over our bed.

I took a piece of cardboard and scraped the scorpion off my leg. It never stung me. I acted out that I was providing protection for my girlfriend the following nights and no more scorpions entered our bed. But I estimate it was pure luck; not my protective defense strategy!

It is definitely a challenge to be Nicholas’s companion. This may be one reason I never got married? 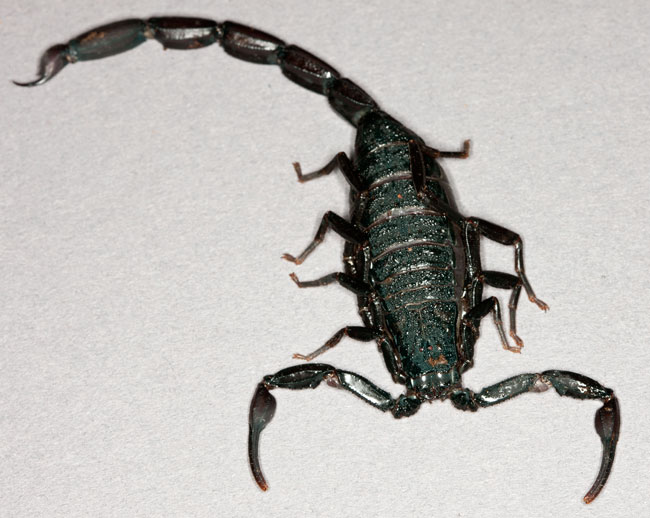 Now you can see how I gain experience with scorpions. I interact with them, in person.

This section of our MayanToons web site is my autobiography of how I have experienced the creatures of the Mayan world during over 50 years. I prefer to learn about flora and fauna by seeing and experiencing them in person.

This personal experience will be the advantage of our MayanToons comics and eventual animations. We do not need to hire an outside expert: we prefer to have our own experience.

The web site www.azScorpion.com says there are 100 species of scorpions in Guatemala. But don’t let this detract you: the scorpions of Arizona are much more deadly. Fortunately a technical article on scorpions suggests there are only 37 species in all Central America (so the estimate of 100 species in the first site may not be realistic).