Gray fox, Urocyon cinereoargenteus, lives in trees in addition to on the ground

Do foxes really live in trees?

Having been raised in the Ozark Mountain area of Missouri, I have seen foxes wandering around as a child. At age 19, I lived for 12 months in the Tikal National Park of northern El Peten area of Guatemala, where foxes wander around the North Acropolis during the day. The foxes at Tikal know that no one will bother them, so they walk around even when people are in the Great Plaza. 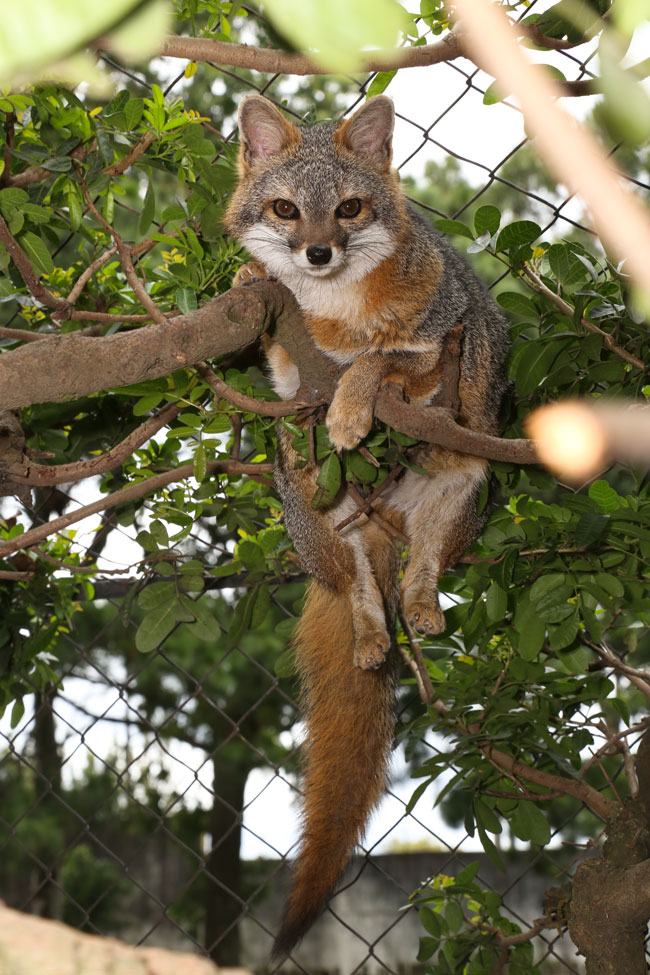 This Gray Foxes. Were picture in the Aurora National Zoo - Guatemala. They are a lot of this foxes in Tikal, Peten at North of Guatemala.

But I had no idea that these gray foxes live in trees. I only learned this when I visited the main Zoo in Guatemala, La Aurora Zoo. They were hanging out on branches, just like the margay and ocelots. Jaguars, pumas, and jaguarundis were on the ground (though especially jaguars can also climb trees when necessary).

Since I was not aware that foxes can live in trees, this is precisely one of the aspects that our Mayan cartoon series will feature: learning from the Mayan animals directly. While in their cage photographing them, I was literally eye to eye with the foxes, less than 2 meters from them. This is how I learn; this is how FLAAR does research: up close and in-person.

I have read tons of books on the mammals of Mesoamerica, and I estimate that many clearly indicate that the gray fox can hang out and/or sleep in trees. But my library research was clearly not as effective as being two meters from the laid back foxes, literally hanging from the tree branches.

Foxes mentioned in the Popol Vuh, a Mayan mythical story

"Now it was all the animals,
both great and small,
that had done it—
the puma and the jaguar,
the deer and the rabbit,
the fox and the coyote,
the peccary and the coati,
the small birds and the great birds.
These had done it. In a single night they did it."

Both the fox and coyote are cunning nocturnal animals that the Quichés associate with discovering and digging up hidden or secret things. (Christenson translation, 2007 electronic version of 2003 publication)

Fox and coyote are associated with each other even in relation to the gods:

The coyote, Canis latrans, is not as visible as is the fox. I doubt there are coyotes at Tikal, but coyotes could be found elsewhere in Guatemala. The Aztecs would have known the coyote.

Foxes are mentioned in other Mayan tales

The Xibaj(ob), a set of supernaturals often called ’devil(s)’ or ’witch(es)’, appear to include some of the supernaturals that are depicted on Classic Period ceramics. The chief witch, Xibaj himself, is a bald human-like figure (also called Tzimajol, ’Gourd Head’, i.e., Skull); he commands a party of skeletons and personified animals, including talking owls and foxes. The story line most associated with this cast of characters is the Messenger tale, where witches visit the abandoned house in which two messengers have taken refuge for the night. Owls precede the caravan of witches, foxes follow and sniff out humans, the witches sit down to a meal of human corpse. (Josserand 2003: 10)

In yet another tale, there is competition, but not a race, between the Rabbit and the Fox. Such Trickster stories are common in some Mayan languages (e.g., Chuj), but do not have a prominent place in Chol folklore. (Josserand 2003: 12).

Our MayanToons will include foxy foxes

Since foxes are already part of Mayan folklore, and since foxes (and coyotes in RoadRunner) are popular comic and animated film characters, our series will include a foxy fox.

Bibliography on foxes of Mesoamerica

Our www.maya-art-books.org web site has many bibliographies on plants and animals of the Maya area. As soon as funding is available we will work to prepare a bibliography on foxes, and on coyotes. But in the meantime, here is one of the references we cite.