Learning about jaguar cubs by interacting with them in-person

Learning about Jaguars in Guatemala

My goal is not to be an animal trainer; my interest is to have each different species of animals train me.

I wish to learn how the animals think, what they want, and do not want. What they prefer. I would like to understand how to avoid stressing them. How can I make each species be relaxed?

My goal is to have our Mayan cartoon characters realistic in appearance, animal-like but at the same time have some human attributes (as is the custom in cartoons for decades).

My prior experience with jaguars

Ricardo Mata, the leading photographer in Guatemala in the 1960’s through 1990’s, was a co-founder of AutoSafari Chapin, with Roberto Berger Lehnhoff.

The brother of Dicky Mata was a dentist, Dr Guillermo Mata. By coincidence he was the dentist I went to for dental care, and thus I met Dicky Mata.

Although I never met Dicky Mata’s jaguar, I heard a lot about her. How she expressed sadness when she realized Dicky was leaving; how she expressed happiness when he returned from a trip. Just like a pet dog.

I am not suggesting that you keep a pet jaguar (or margay, ocelot, and especially not a nervous jaguarondi or a mountain lion). But as unpopular as it is, some jaguars live longer lives in someone’s home than they survive before run over by someone’s Jeep on a jungle trail, or shot by a poor farmer who needs the few pesos or quetzals by selling a jaguar hide to support his family which grows larger every year.

During the 1970’s through 1990’s, on the desk of many businessmen, was a photo of them with their dead jaguars hung from a pole (or the dead jaguar hide on their wall). I would rather have the jaguar happy and alive. Obviously even better happy and alive out in the rain forest, but, sorry, the forests of Guatemala are being exterminated at an increasing rate.

And yes, it is understandable to say that a scientist should study each animal in their natural habitat. But during five years living in the remote seasonal rain forests of Yaxha, Guatemala for a several month season each year, I never was able to see a feline. During 12 months living in Tikal, you could hear them at night, but not see them. While white-water rafting on the Rio Usumacinta, you could see fresh feline tracks on the sand beaches.

Fortunately I did see a jaguar crossing the road one evening when we drove to Remate in 1965, and I saw another jaguar crossing the trail while leading a group of tourists to Calakmul, Campeche, Mexico. But since there are five felines, plus another score of birds, reptiles, and insects which I wish to learn about, unfortunately spending another 20 years in the jungles is not realistic. Not to mention that living in the jungle to study the animals in their habitat would only result if a benefactor could fund this (I must admit I would rather live in the rain forests studying plants and animals than in the city).

But until such a contribution makes it possible to return to the remote areas, I do my best to experience felines where the zoological gardens are considerate to provide access to our team.

It is common for a feline or lion parent (especially the father) to kill their young (probably in order to get more attention from the female). If the female keeps the young she may not be interested in mating for between one and two years.

So it is understandable that baby felines are sometimes safest if removed from their nest and reared separately. So most zoos that I visit are raising baby felines with baby bottles.

Namu is the name of this young jaguar. He is being raised in the ample open garden area of the veterinary doctor. This yard is probably larger than many entire jaguar pens at a crowded zoo.

Dr Gustavo Gonzalez has plenty of experience with animal health. Indeed the first thing I noticed was that the young jaguar had lots of space to wander around. Plus, had two young leopards as companions (so could learn how to interact with felines). And, the jaguar had about eight dogs to interact with.

Each of these dogs had a slight different personality. This can help the jaguar understand that not every creature will play by the same rules!

Dr Gonzales clearly held the role of both father and mother to the jaguar. Except, except when Namu wanted to learn what was in my pants pocket. I keep my US dollars separate from my Guatemalan paper currency by having my several US dollar bills in a small plastic zip-lock snack bag. I do not have a wallet in my back pocket since I travel frequently to foreign countries and thus need to have cash to pay the airport cab to the hotel where I stay in that country (FLAAR has a second division which does research on wide-format inkjet printer digital technology; every year we go to Dubai, Johannesburg, Istanbul, Shanghai, and Miami as consultants to digital printing trade show organizers). 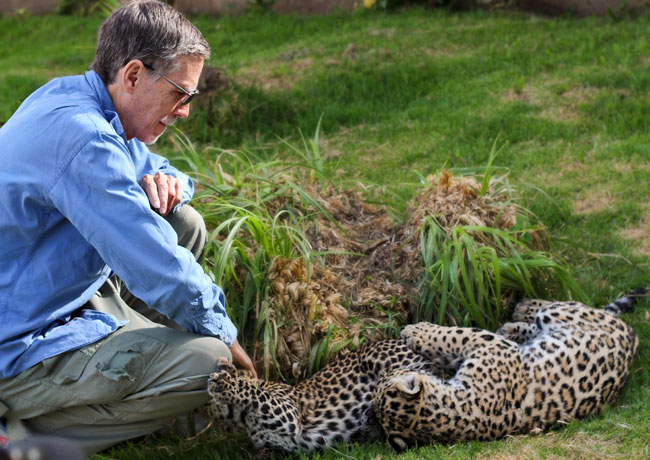 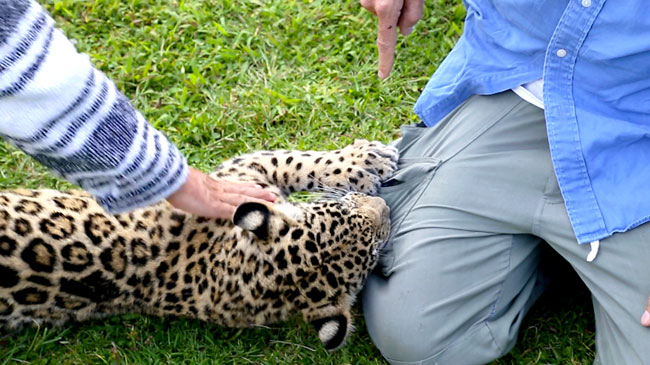 The jaguar either wanted to play with this bag, or more likely, was curious to see what it was and why it felt different in his mouth.

The time invested in interacting with this young Guatemalan jaguar was an excellent learning experience. I realized how much more I still have to learn about felines.

But my goal is to have a better understanding of the animals of Guatemala and neighboring countries. I appreciate that François Berger, AutoSafari Chapin, facilitates my access to I can continue to gain experience. We also appreciate the hospitality at La Aurora Zoo, in Guatemala City.