Stingless Maya bees of Guatemala will either attack, or not bother you, depending on whether they know you, or not

Bees are everywhere in the Maya and Aztec worlds:
So why no Maya the Bee comic character here?

There are bees in every Mayan village. Bees are everywhere in the forests. In Guatemala there are even bees which live in the ground ! (this I learned from biologist Mirtha Cano).

Since I lived in German-speaking countries for about 20 years, I am familiar with Die Biene Maya comic books and cartoon animation movies. In English it is known as Maya the Bee.

In Europe, and especially in Eastern Europe, Maya is a girls name. One of the FLAAR managers (from East Germany) named her daughter Maya (and another FLAAR employee is naming her daughter Jade (since jade is the most common precious stone for Mayan jewels).

If you Google Maya girls name you get the history of Hindu philosophy. For Eastern Europe the name Maya is often considered related to the name Mary (maria). The Internet also says that Maya is the Daughter of Atlas!

Either way, a bee named Maya is no surprise for Germany. The snag is that Maya is like Xerox or Kleenex, it is a generic word. Indeed the Maya software, Maya 3D animation software, of the respected company Autodesk, is what gives most Google returns.

As an archaeologist, I am aware of the academic differences between the spelling Maya and Mayan. But these are pedantic differences; scholarly jargon. The general public uses the word Mayan, not Maya.

Snag is that Mayan is the scholarly term for the languages spoken in Mesoamerica. Double snag is that Yucatec Maya and Lacandon Maya are both Mayan languages. So the pedantic aspect is totally inconsistent.

Either way, the spelling Mayan is the most common today, though in scholarly jargon, Maya is both noun and adjective. So, a bee in Guatemala would be a Maya bee to a scholar but a Mayan bee to a visitor.

Since we raise Maya bees in front of the office of our comic book illustrators, you can be sure we will have a Maya bee character. After all, there are so many species of native Maya bees here, we can pick and chose what kind of bees we will consider. In the meantime, below I discuss my experience with native bees of Guatemala.

Learning about bees from Mirtha Cano

I learned a lot about stingless bees from Mirtha Cano, since if I remember correctly her thesis was on this subject. It is natural to assume that “bee hives are in trees, or at least bushes” but lots of stingless bees of Guatemala live in the ground! Over the years I have noticed that I learn a lot more hiking through diverse eco-systems of Guatemala than simply reading books (though I read day and night nonetheless). But I also hike through remote areas on field trips at least two or three times every month.

Learning about bees from Scott Forsythe

Rio Dulce area guide Kevin Lock introduced me to Scott Forsythe, who has specialized in native Mayan area honey bees in general and stingless bees in particular. Scott showed me where I could find, and experience, diverse species of native honey bees. We also were able to do photography of stingless bees at hotel Posada Quirigua, courtesy of the hotel owner, Masaki.

We also were able to do photography of stingless bees at hotel Posada Quirigua, courtesy of the hotel owner, Masaki.

Being chased by wild bees in El Peten

While studying water lilies which occasionally bloom underwater (along the Arroyo Pucte, tributary of Rio de la Pasion, Sayaxche, El Peten, Guatemala), we had to camp along the shore (since there are no hotels anywhere nearby). During the afternoons and early mornings I would wander around the palo de tinto seasonal swamp area to see what flora and fauna I could find.

I found a photogenic nest of stingless bees, but every time I tried to do photography, they attacked me en masse (as in scores of bees all at once). Their attack was so effective that I could not get near their hive (after they learned to detect me).

Yet when we have found equally wild hives of stingless bees in our garden in Guatemala City, these bees are accustomed to people wandering near their hive, so they do not attack anyone.

Humans have probably been raising bees for thousands of years. The Mayan people needed bees since there was no sugar cane sugar to ruin their teeth! Still today, many people raise bees as a hobby. I believe this was a hobby of Yale University professor Dr Michael Coe.

Best way to “raise” bees is to have a garden with hundreds of totally different flowers. And not to use insecticide. Our garden attracts several species of butterfly, at least three to five species of bees (some with stinger, others stingless). And lots of wasps (all with stingers!). We have bats enjoying our flowers in the evening, and I would estimate there are also moths at night as well.

So our Mayan ethnobotanical garden, in the middle of the suburbs of Guatemala City, Central America, makes lots of insects and arachnids happy (including scorpions, ants, beetles, and diverse kinds of spiders). 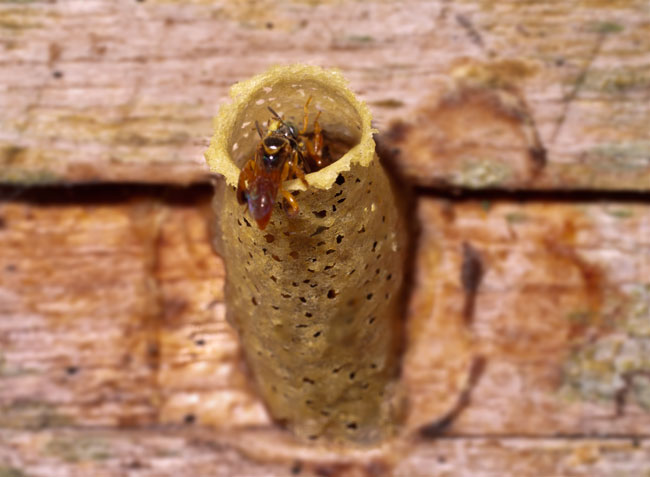 This is a nest of Stingless bees, photographed by Dr Nicholas at Izabal in 2011.

It’s tough to find the nest of each insect, but we do find butterflies laying their eggs, and their impressive larvae. Often we have wasp nests on the windows (we ask the cleaning staff not to harm them). Finally one day tiny tiny little stingless bees made a nest in a hollow tube in the concrete wall separating our area from the adjacent house up the hill. The happy bees kept their nest for over a year.

These bees never once attacked any of us, since they soon learned we never attacked, or swatted, or used insecticide against them. Yet when we are out in the forests or jungle-like areas, even several meters away from a bee colony, they do a mass suicide attack on your head.

Then one day I noticed black stingless bees had invaded our colony. I watched in horror as thousands of attack bees slaughtered the cute tiny bees. The black bees were not large, but they were almost twice the size of the petite meliponia.

The attack bees dragged the (often still partially alive) bodies of the harmless bees out of the tube and dumped them on the ground to die. The attack bees then stole whatever they were looking for and about a week later abandoned the ruined hive.

Much to my surprise a week or two later, I began to notice the original harmless meliponia bees begin to fly out of the tube. I asked Scott Forsythe, and he said that perhaps a few of the original bees were deep deep within their tunnel, and the invading black bees were content to pillage what was up front and easy to obtain. 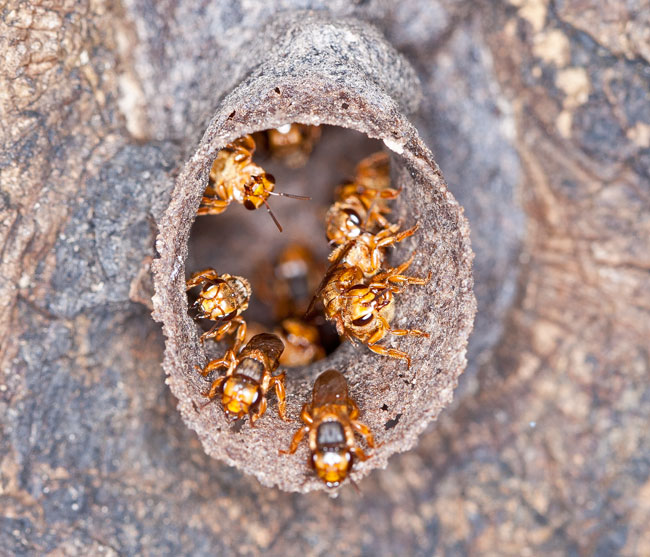 There are a lot of bees in the Arroyo Pucte area of Peten, near the Rio de la Pasion (where we camp to study water lily plants).

Now, about eight months after the departure of the invading mass of black bees, the cute little meliponia are happily continuing to live their lives in the FLAAR gardens. Today I clipped away three leaves that were in their flight path (to leave the hive and reach the flowers elsewhere on the property). None of the bees attacked me.

What you can learn

Bees who do not know me, will do a mass attack instantly when I arrive to do photography of their nest. Being “stingless” does not mean not being successful attackers of humans. They attack in a suicidal mass, diving into your hair, ears, nostrils, and buzz down through your hair to your skin. 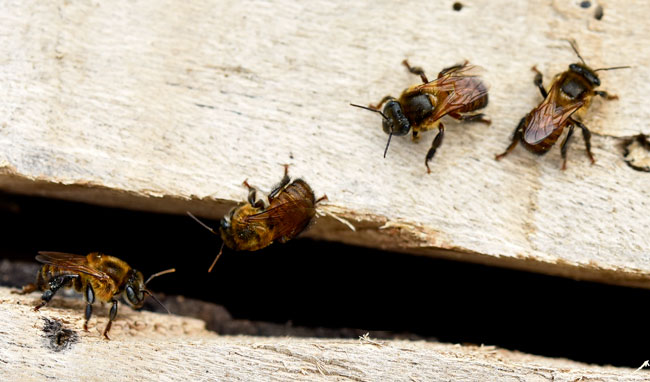 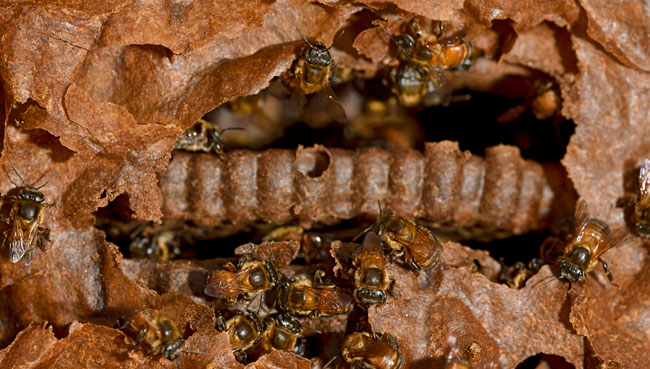 Tough to find the queen Maya bee! I did not wish to disassemble the bee structure to find her, so I photographed what was available on the surface.

This bee hive was inside a hollow tree trunk or branch. This is the traditional Mayan manner of keeping bees, especially stingless bees. You can also make a normal rectangular wooden box, but most local people in remote areas prefer to use a hollow trunk or branch (often the original tree where they found the nest…) Sadly this means the tree is chopped down to be able to bring the nest back to the person’s house).

Rio Ixbolay (also spelled Icbolay), in the yard of Don Chus (one of our long-time plant scouts). This is at the bridge over the river, along the new paved highway towards La Chua park, Alta Verapaz.

Bees which know me will not attach whatsoever. Comparable with wasps in the FLAAR garden, as you can see from this link.

Since people living in the USA, Europe and Africa have vicious stinging bees, we felt it would be helpful to show the world the cute stingless bees of the Mayan areas of Guatemala.

Especially if you live in Europe, your “exposure” to bees will be Maya the Bee, the comic and movie Maya the Bee. We prefer to introduce the real Maya, of Guatemala.