The Mayan people of our storyboard are Victor and Maya

I have been conceptualizing characters of our Mayan sagas for several years, and starting about 2013-2014 we began to do initial sketches. By 2015 we had an in-house team doing more illustrations. I did the storyboards, but each artist put their own heart and soul into how to express my ideas. 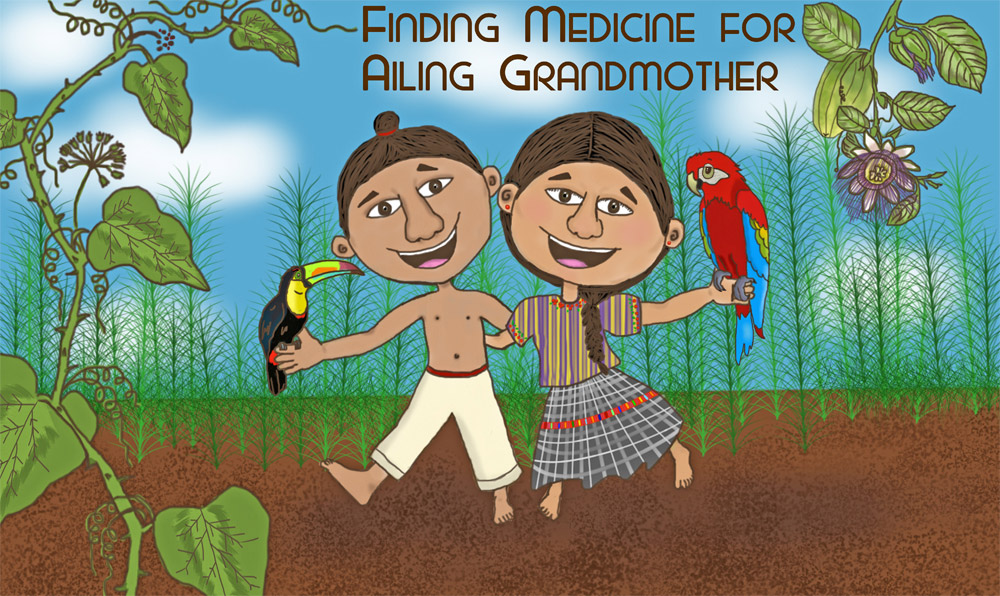 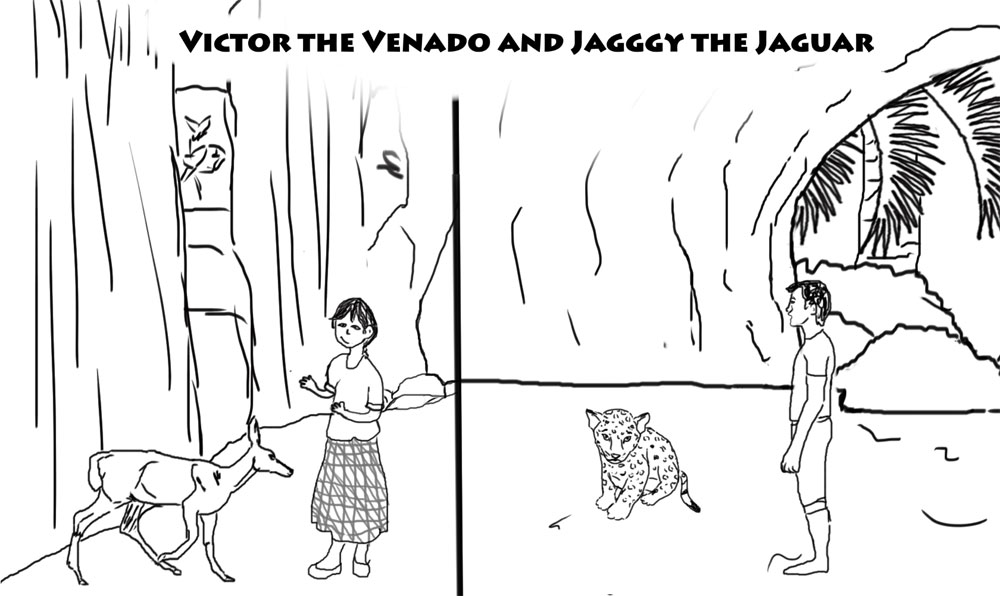 I am still doing technical evaluations of digital imaging equipment. FLAAR has been an international leader in wide-format inkjet printing for over 15 years (read by about half a million people around the world).

I am still doing scholarly research and writing articles on Mayan plants and animals, and I still lecture on Mayan archaeology at museums. But since I work 14 hours a day all week, I spend portions of every evening and weekend now working on developing our cartoon characters. 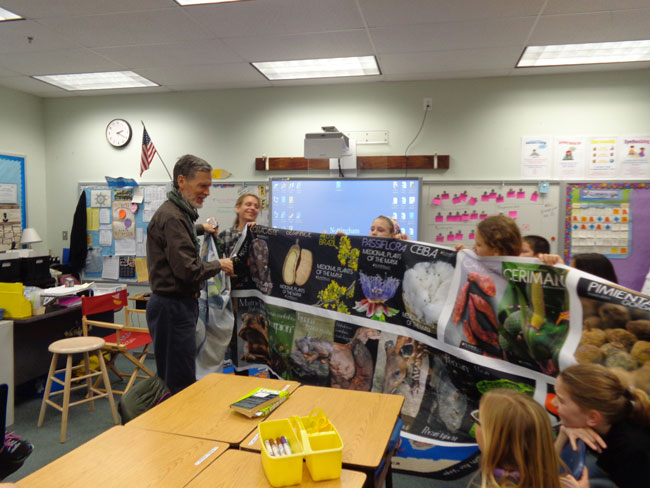 We have learned that school kids of all ages really enjoy learning about Mayan culture, and about the crocodiles, jaguars, and interesting plants of the Neotropical seasonal rain forests of Mesoamerica (central and southern Mexico, Guatemala, Belize, Honduras, Nicaragua, Costa Rica: the area of Latin America influenced by the Olmec, Teotihuacan, Maya, and Aztec).

Friendly, funny comics can also be educational, since a peer-reviewed journal article is tough to hold the attention of most students. So we do academic reports for those who naturally prefer this level, but now we are “translating” our decades of knowledge for the rest of the world.

The Crocodile and Alligator (Caiman) of our comic books

We are testing many different styles of animal characters.Naturally for the final edition the style will be more uniform among the many different illustrators who work for us in-house. Drawing by Kevin Cerna, copyright FLAAR 2015.

There are three species of crocodilians in the Mayan world, and my PhD dissertation included crocodile and caiman representations at Copan, Izapa, and other Mayan sites. So we will introduce Cracky Crocodile and Kyman (Caiman) Alligator.

Water birds are important: Billy the Boat-Billed Bird is one

Much of my PhD dissertation was on water birds of the Mayan rivers and swamps. Plus I lived on the shores of Lake Yaxha in the remote Peten area of Guatemala for five annual field seasons, creating a national park here in the 1970’s. So not much surprise that water birds will be in our adventures.

Ironically this bird was featured by Olmec-related pre-Maya cultures such as on the Tuxtla Statuette. Drawing by Milka Girardi, illustrator at FLAAR, copyright 2016.

This bird is continually upset that people think it is a duck, because of its duck-billed appearance. But obviously we will also do a bird comic character which is totally different than Donald Duck, Uncle Scrooge, or Daffy Duck.

Jagggy the Jaguar is our logo character. This is based on an illustration of a jaguar baby concept by our team about four years ago. Then Maria Sequen of our team turned it into a logo that we used for two years. The year (2017) graphic designer Dia Zea added additional changes to create its current look that you see here.

Lots of feline characters, my favorite jungle animals. Indeed our logo is Jagggy the Jaguar. Jaggy and Jagy are already used (for clothing). Our Jagggy has nothing to do with clothing: it’s an actual Jaguar! 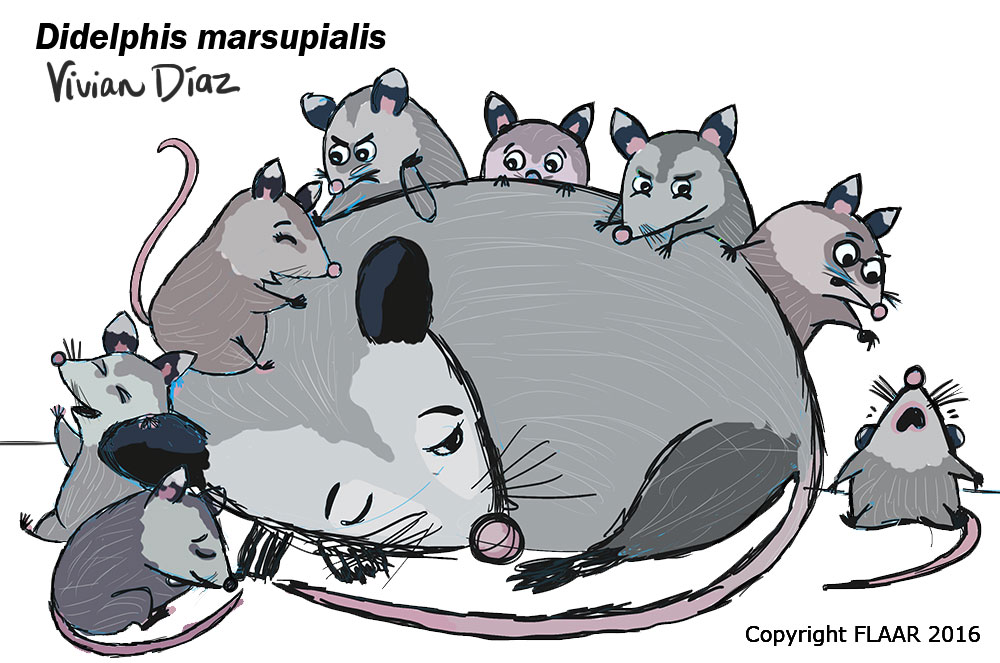 Here is a mother opossum, a good example of a hard-working mother, carrying for often rambunctious children.

Several more female Mayan characters will be in our comic books, indeed one of the heroes will be female.

Plus the comic book sagas will have other female Mayan characters: children, tweens, teens, wives, mothers, aunts, and grandmothers.

Our focus is on ethical values and cultural values, but even in the best of situations there are individuals who are unethical and engaged in inappropriate behavior. So yes, there will be bad guys. 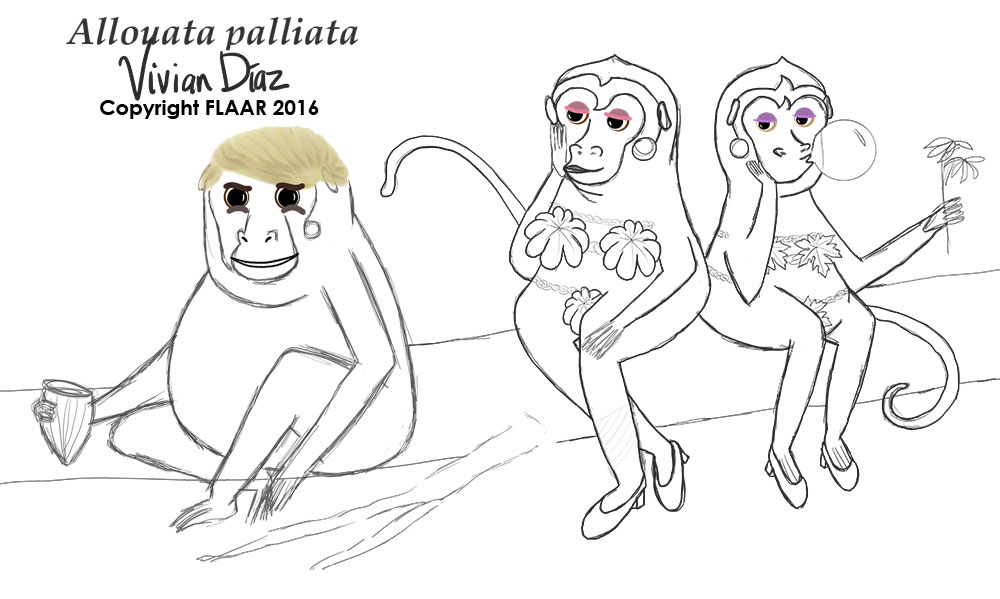 This is Grumpy Trumpy.

The Howler Monkey is an actual animal in Mexico and Central America, and is world renowned for being loud, noisy, and repetitive (making same shouting every time).

USA, “America” discovered how to vulcanize rubber circa 1839: Thomas Goodyear. We all learn this in “American” elementary school.

But how many elementary school textbooks teach that the vulcanization of rubber was discovered IN MEXICO? about 3500 years before “American” Thomas Goodyear! 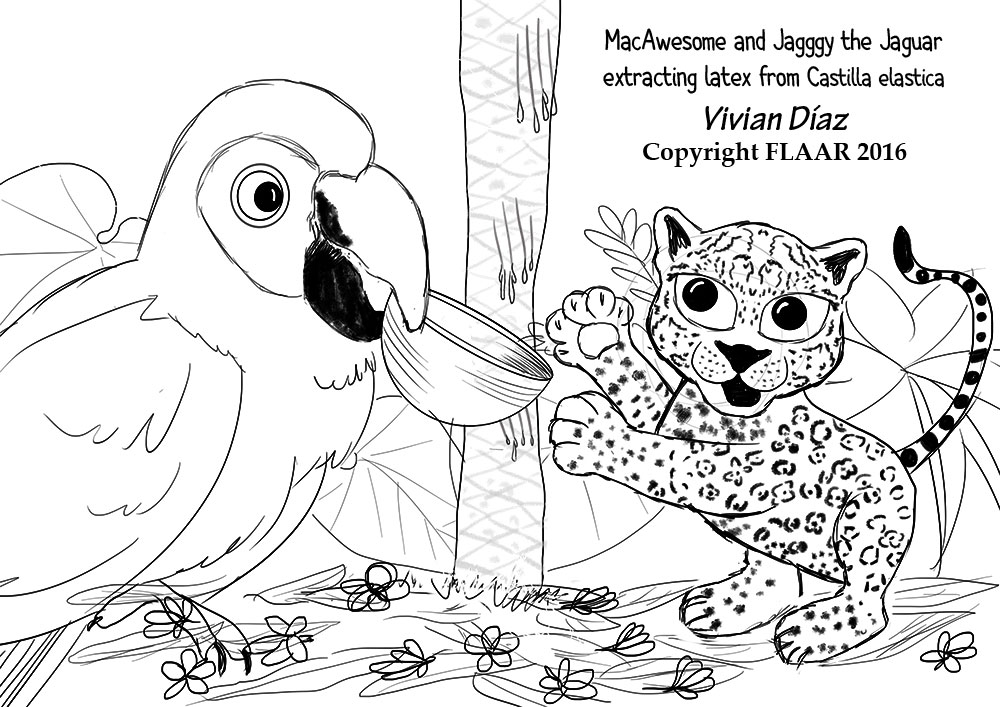 We have been studying Castilla elastica tree for several years, and recently were surprised to find the plant used to vulcanize rubber 3500 years ago (Ipomoea alba) was growing in the Mayan ethnobotanical garden alongside our offices.

So we will have a cute illustrated discussion of native rubber processing of Mesoamerica, and how it was vulcanized long, long, long before “Americans” figured this out.

So the MayanToons comic books will document the inventions, scientific discoveries, and advances of the people of Mexico, Guatemala, Honduras, and nearby countries THOUSANDS of years before “America” was invented.

The Mexican instructors who taught me English in Saltillo, the Mexico people I worked with at age 17 in near Lake Necaxa (near Huachinango, Puebla), the Mexican people who provided hospitality for decades while I was photographing pre-Columbian archaeological art and ancient rubber ballgame ball court architecture in Veracruz, Tabasco, Campeche, Yucatan, Quintana Roo, Chiapas, and Oaxaca, and the people of Guatemala, Belize, Honduras, and El Salvador, helped educate me my entire life. Still today I enjoy learning about the flora and fauna of these parts of Mesoamerica.

I also did archaeological work two seasons in Peru, once for Peabody Museum Harvard, and then for the Peabody Museum of Yale University. While in Peru both times I appreciate the hospitality of the Aspillaga family there. I lived and worked in a very remote area into the Andes Mountains from Huarochiri (did all my research on foot, since not even 4WD could get to where I had to go (for a Yale University project).

The Chavin, Moche, and dozen other pre-Inca cultures were of interest to me, but I must admit that the Maya, Olmec, and Teotihuacan civilizations of Mesoamerica are what will be the focus of my current educational programs.