On our Maya archaeology web site we list the best known places where you can see sculptures of Bufo marinus in Guatemala. 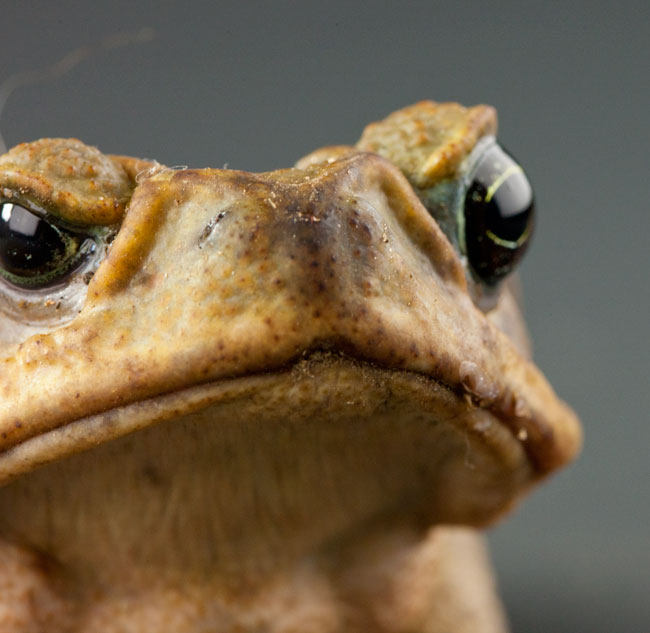 Best to read articles written by biologists or chemists on the amazing chemicals in the venom sacs of a Bufo. These poison sacs are clearly visible behind the “ears” of the toad.

The venom is not spit, ejected into the air, or otherwise propelled (at least not as far as I am aware). I have no hesitation whatsoever in picking up any Bufo toad to inspect it. No toad has ever released its venom when I picked it up (the toads can clearly tell whether or not you intend to harm it).

If your dog chases any Bufo toad, your dog will die

When a dog bites a Bufo, the bite releases the venom in the poison sacks behind the ears of the toad. The dog will die a slow, painful, and messy death. 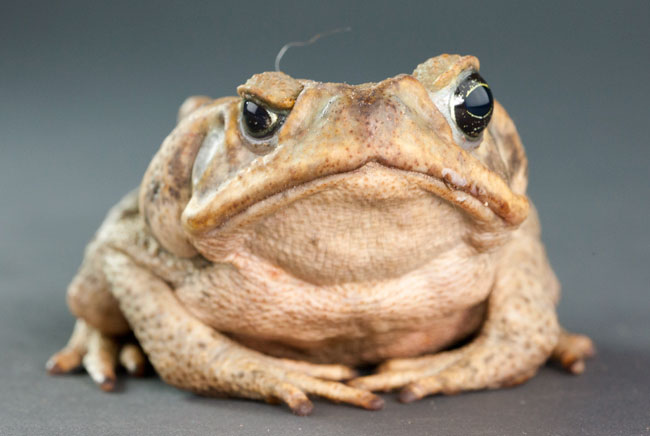 Bufo marinus is very toxic. It's You can see the two sacks behind the eyes. There is where they storage the poison toxins.

Teaching children the dangers of drug use

The Bufo marinus is a great example to teach values to your children very simple: if they ingest toad juice, their death will be so slow and painful (and revolting) they will be very sorry.

Thomas Gage, centuries ago, wrote about Maya use of the chemicals of Bufo toads in their intoxicating drinks. This is the edition published by Thompson.

"The Indians generally are much given to drinking, and if they have nothing else, they drink of their poor and simple chocolate, without sugar or many compounds, or of atole, until their bellies be ready to burst .. Among themselves they make drinks far stronger than wine. These they confection in those great jars that come from Spain. They put in them a little water, and fill up the jar with some molasses or juice of the sugar-cane, or some honey to sweeten it. Then, to strengthen it, they put in roots and leaves of tobacco, with other kinds of roots which grow there and which they know to be strong in operation. Nay, to my knowledge, in some places they have put in a live toad, and closed up the jar for a fortnight or a month, till all that they have put in be thoroughly steeped, the toad consumed, and the drink well strengthened...

This drink they call chicha. It stinketh most filthily, and certainly is the cause of many Indians' death, especially where they use the toad's poison with it..."

Evidently Laughlin has noticed or at least heard about contemporary use of Bufo in sacred drinks of Highland Mayan people. But I do not yet have a specific book or article or viable reference to this unexpected occurrence still today. However I would point out that some of the chemicals imbibed by tourists around Palenque during the 1960’s through 1980’s were by no means authentic pre-Columbian usage (these were happy hippy delusions).

Most of the literature on toad use by the Maya discusses the chemicals of the common Bufo marinus. I am not familiar with the Bufo alvarius.

Bufo are easy to find and photograph

We have plenty of photographs of both Bufo valliceps and Bufo marinus. In most hotel gardens, just go outside at night, and you can often find one of these toads. The Bufo valliceps we found were on the shores of the Rio San Pedro, on the property of the Las Guacamayas Biological Station, El Peten.

Bufo valliceps can be found all the way to the high altitudes of Jacaltenango, Sierra de los Cuchumatanes, northwestern Guatemala (Baylor and Stuart 1961:195). The Bufo valliceps that we found were at only several hundred meters elevation, along the Rio San Pedro, Las Guacamayas Biological Station, Peten, Guatemala.

Bufo marinus is commonly found around houses (and hotels)

Every time I ask a local person about Bufo marinus, they use the word “large” to describe these toads. But what are really large are the Mayan renditions in stone sculpture, especially at Kaminaljuyu area, Quirigua, and Izapa (Chiapas, Mexico).

The Bufo marinus in our yard dug escape tunnels many meters to move under concrete walls into other garden areas. I estimate that the opossums finally killed the toads. Or they dug deep down and simply never came back up.

Although Bufo marinus can easily dig considerable distances, they do not “live underground” to the degree that uo toads do. Uo toads spend almost all their life underground (except for rising to the surface when season rains signal it is time for them to rise to rain water ponds to made).

When archaeologists and zooarchaeologists list Bufo skeletal remains in middens of archaeological sites in Mesoamerica, it is important to recognize that many of these Bufo toads may simply have dug their own way down into the midden hundreds of years ago. Not every Bufo skeleton is automatically dumped there after a Maya priest’s ritual!

For the uo, their mating song is infamous, and unique for the sheer magnitude of the noise on the mating night. For the Bufo species, their croaking and mating songs are often studied but to the casual observer are about what you would expect for a happy toad or frog out in nature.

My personal experiences with Bufo marinus and Bufo valliceps 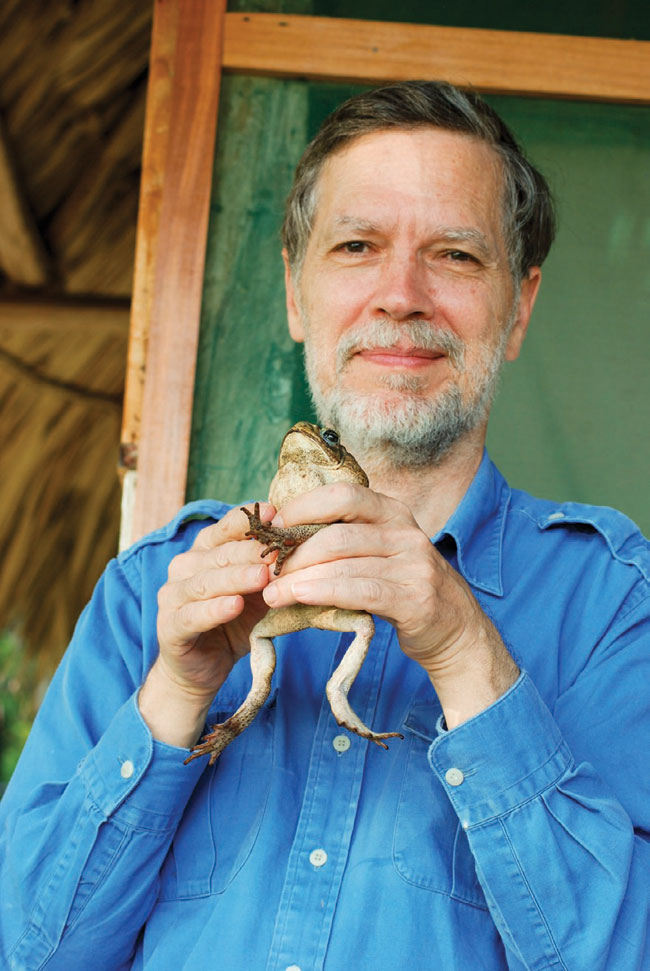 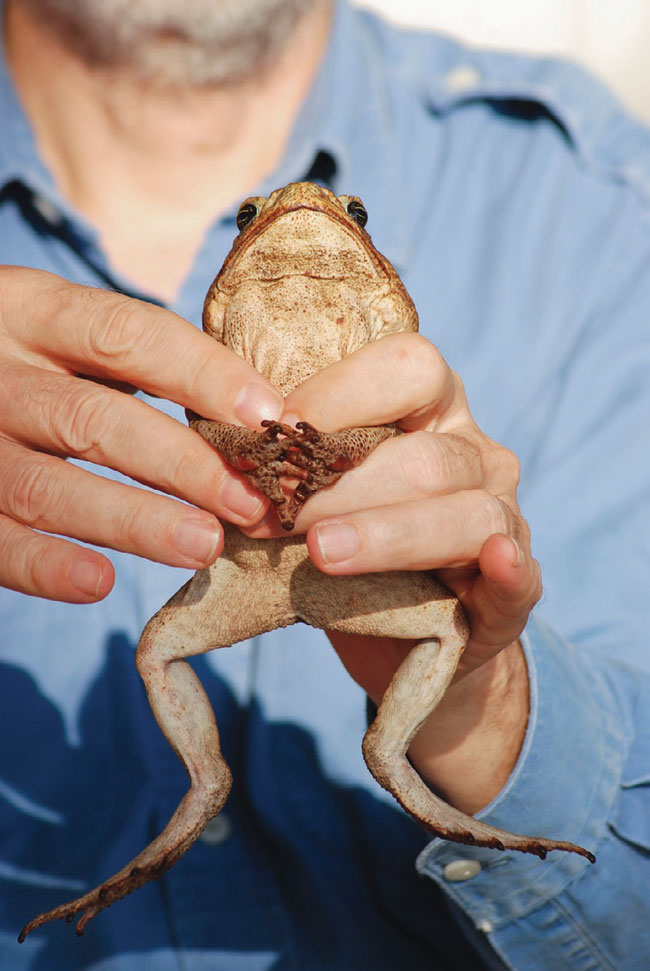 Bufo marinus at Las Guacamayas. It's great to be so close to this creatures and be able watch and study them.

I have never imbibed nor otherwise accessed any of the chemicals exuded by any Bufo species, nor any mushroom or comparable Aztec or Mayan plant. I was a student at Harvard in the 1960’s, but I did not need toad juice or mushrooms to get high! Learning about the Classic Maya in the libraries at Harvard kept me plenty high (I will admit to drinking the normal alcoholic beverages as would any college student past or present).

I did not pay special attention to Bufo toads when I lived at Tikal and Yaxha, in part because they were very common. But in the recent 10 years, as more and more I found made discoveries in flora and fauna, an interest in this remarkable creature was reawakened, in part because Bufo marinus is so often pictured in ceramic renderings and especially in monumental stone sculpture. Plus I recognized that the chemicals in these venom sacs were a good reminder to people of all ages that there is more in life than giving up and indulging in drugs to escape reality or to enhance reality.

A good place to find Bufo toads is along the Rio de Pasion and its tributaries, such as Arroyo Petaxbatun. In this area I often visit the Hotel Posada Caribe of Julian Mariona. He took us on a long hike into a remote area to find “blood sap trees” and trees with conical spines other than the common Ceiba pentandra.

We finally reached a thatched Maya house compound with a friendly family and their spider monkey (which was fully free to wander around, including run away to the jungle if it really wanted to).

I asked the family if there were any big toads nearby. A little 4 or 5 year old daughter lit up with a smile, ran into the house, and came out saying there was a Bufo toad in her house (I assume Bufo marinus).

I picked up this Bufo and I have no hesitation handling any other Bufo. They just act bored until you put them back down on the ground. My hands are directly adjacent to their poison sacs (but obviously I avoid putting my hands on top of the poison sacs).

Our Q’eqchi’ Mayan intern says that Bufo toads often wander into their house (between Senahu and Cahabon, rainy Highlands area). Keep in mind that a typical Mayan house has no step, no porch, nothing to keep toads out. Usually the doors are kept open all day long. Plus there are usually a few areas of the wood pole walls which have a hole big enough for a toad to easily gain entry into the house.

It is best not to kill these toads because they eat insects. Although I would not want a Bufo toad in my bed at night, I would not mind it wandering around on the floor (to help get rid of insects). Thus I hope in the future that funding is available so we can write brochures in the Mayan languages to indicate that these toads are not dangerous: simply teach your dogs not to bite them, and educate your children not to pick them up (since a child might hold the toad on the poison sac area by mistake).

Several species of Bufo toads can be found from Texas down through Mesoamerica. Most Mayanists list only Bufo marinus, since this is the larger species, but other pertinent Bufo species should at least be mentioned in studies of Maya use of Bufo toads, especially Bufo valliceps, which is common in Guatemala.

In some areas of Guatemala you can find Bufo marinus, Bufo valliceps, and even Rhinophrynus dorsalis (which of course is not related to Bufo in any way). The airfield aguada of Tikal is one such area where all three can be found (listed by Campbell (1999:14, caption to figure 8)).

There are so many birds, fish, amphibians, reptiles, not to mention thousands of insects and lots of spiders inhabiting the diverse eco-systems of the Mayan areas of southern Mexico, all of Belize, most of Guatemala, and adjacent border areas of Honduras and El Salvador. The Classic Maya focus on representatives of each eco-system and each genetic family of creatures.

Over the last several years we at FLAAR Mesoamerica have been making lists of all the creatures which interact with the Mayan people and/or appear in the Mayan diet, art, myths, or other aspect of being associated with Mayan culture.

To organize these creatures for our caricatures as spokespeople for learning both family values and learning about the often frankly bizarre creatures, we are dividing them into several featured groups: “treetops” is one group (all creatures which at least sleep or otherwise spend ample time up in the trees).

Another group are all creatures associated with water, whether rivers, lakes, swamps, or salt water (oceans or brackish areas such as mangrove swamps).

Frogs and toads obviously tend to be associated with water.

Donations are appreciated, and can be sent by contacting us via e-mail FrontDesk “at” FLAAR.org